So I finally got my light box set up. It’s not quite as good as I’d hoped, but it’s still a lot better than my previous set up. I took a ton of pics this evening, and so here’s the first batch – some generic fantasy scenery. While in many ways it’s not especially exciting, I’ve decided that I want to photograph everything that I finish this year, and on a wider scale, photograph everything that I’ve painted that is still in my collection.

Here’s the Warhammer Fantasy Siege Attackers models. The Siege Attackers and Siege Defenders boxed sets were released years ago alongside the Warhammer Fortress, as well as a few other kits such as Siege Mantlets and Siege Towers. I picked up both of these, as well as a Fortress and a few extra wall and Tower sections back in the day. Never got any of the others, but ended up with some miscast mantlets which I added to a Nurgle Rhino which I never finished.

The two pieces in the lighter shade of wood (the wheeled ram and the metal-capped carried ram) were painted years ago. The other pieces were painted recently as part of sorting through my models and seeing them in a box unpainted, and then deciding to knock them out quickly. I’ve got a bunch of Uruk-Hai siege gear somewhere from the LotR sets which I should do the same with. 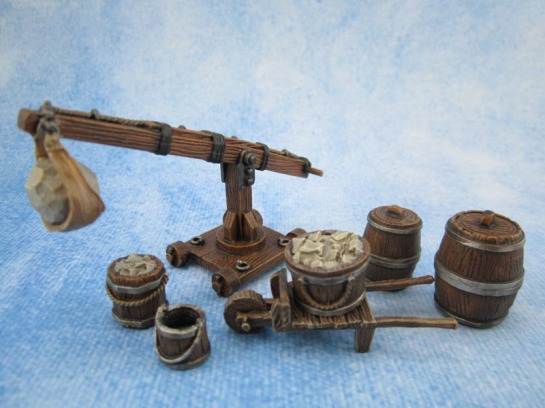 (Most of) the Warhammer Siege Defenders Set

My Defenders set is missing a few bits and pieces. The cauldron is missing the cauldron piece (I have the side supports), the rock dumping flat platform thing (I think I saw it recently), and the big rock.

Here’s a couple of box pics for posterity. I’m planning to paint that Warhammer Fortress finally, as well as the extra bits, and I also picked up another Fortress from GW Mail order recently, as to my great surprise they were still stocking it. Well, it turned up as a shipping box filled with the components in individual baggies rather then in the original box. But now I’ll have a decent sized castle when I assemble the new pieces, do some putty work on the old ones and then paint the lot of them. Then I can repaint and detail my original Mighty Fortress. Does this middle-era count as Oldhammer? Probably not, it’s got to be from around 4th-5th Edition WFB. But then again, close enough! I’m hoping to get some specific use out of these siege toys via Kings of War and the Lord of the Rings SBG, but they can certainly make for a cool background and scenario in almost any game we can play on the table…

I didn’t recall who made this model, so I looked it up and again found it on Scotia Grendel’s website – but I got it 10-15 odd years ago, got it mostly-painted, and then never quite finished it. It may have also come with a casket. I’m not sure. I’ve got one or two resin caskets sitting around unpainted, but not sure if any came from/with this kit. Anyway I finished it up about a month or two ago, and now it’s done and chalked up to 2014’s credit!

Here’s the rear view. The Warhammer-cross gravestone was a separate piece that had to be glued on. The rear of it had no detail at all, and so I added a thin layer of putty and did the best I could at the time to try and add something that would fit. If I did it today I’d use grey stuff and press-moulding and so forth, but I’m not going to change it. It looks a little rough, but it’s one of those things you’d never really notice unless you were told about it. I suspect now that a lot of the area I added static grass to back then was originally supposed to be simply-sculpted dirt. Ah well. 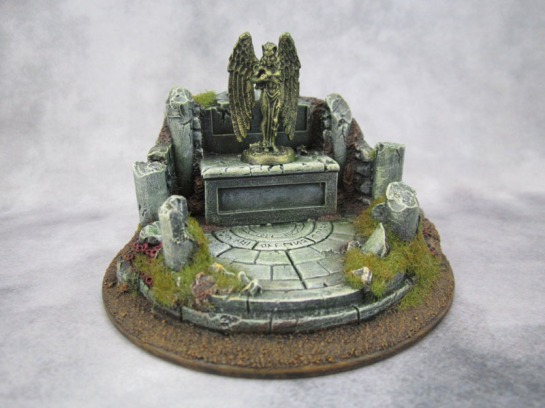 Another piece of resin scenery from the same era, and again finished a month or so ago. Once again, not sure who created this model initially. Again, Grendel would be the front runner, but I couldn’t find it on their modern website so who knows? I’ve based this one on a drink coaster and added a vampire model from …early Reaper? Ral Partha? Grenadier? Dunno. I’m sure it says under the base, but I’m not about to pry her up. It’s the same figure I also used on one of the pillars I showed a few posts ago. No verdigris this time. Need to keep them a little distinct.

I painted the little fungus things in a deep red mostly because I wanted to avoid whites, greys and bone shades. When I eventually get hold of a couple of the Citadel Graveyard sets, I’ll use some deep red flora to tie it in.

Another piece of scenery I got back in the day. I really bought quite a lot in the several-year period around 1994-2005 or so, and then very little for a long time after – until recently. No idea who made this one, of course, but it’s a nice little piece. Hollow resin. I think it was about $20. It’s a little small for Warhammer models, so I suspect it’s a “proper” historical scenery model.

Just the sort of thing I’d buy more of, if I saw for the same price now. This was actually painted back when I got it, so no 2014 credit here. Obviously this can work well in Fantasy or Historical games. The blue struts are perhaps a little garish for a lot of historical games, and if I were to paint this today, they’d probably be brown, but hey!

Remember those barrels that were in that other post? Well, I found the last one of their set, finished it, and have now photographed it. These will make good scenery for large-scale fantasy battles, smaller-scale fantasy skirmishes, roleplaying/dungeon bashing or even Historical games, such as use in Bolt Action.