Yeah, more Ork Slugga boyz. That’s how it works, I guess, when you’re painting a horde army yet wanting to make every model pretty unique. Once again we have a mix of Fantasy and 40k Ork parts that built these four. Several of these were painted black, and it looked decent, but… I was thinking that I should probably save the black (and black camo types) for the Kommandos and similar elites. 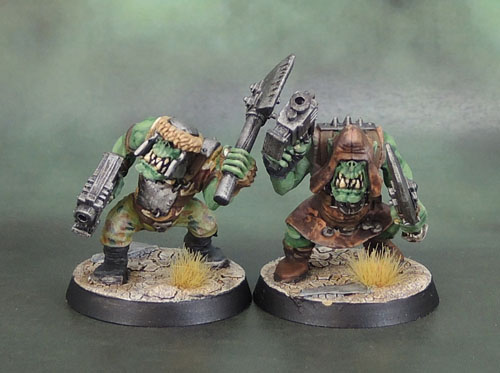 So they sat again in limbo while I tried to figure out how to paint them. Who should come to my rescue but Warlord Games – in one of their recent newsletters on the 2nd November, they featured a tutorial video by The War Gamer on painting German Plane Tree Autumn Camo. After a few days I got around to watching it, and decided it looked distinct enough from what I already had – and importantly – distinct from the green Ork skin, so worth giving a shot, especially since I picked up the full range of Army Painter paints recently, so I had all of the colours. 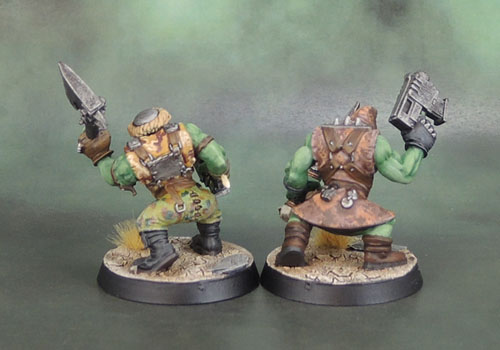 As you can see, it worked out… reasonably well. Not as nice as I’d hoped – and my concerns about the washes muddying the detail indeed came to light. Still, it looks decent, and so I’m happy enough with it. I also found another method to paint the same camo, also on Warlord’s site – which I have been using on the next batch of Orks. Finished soon (probably). 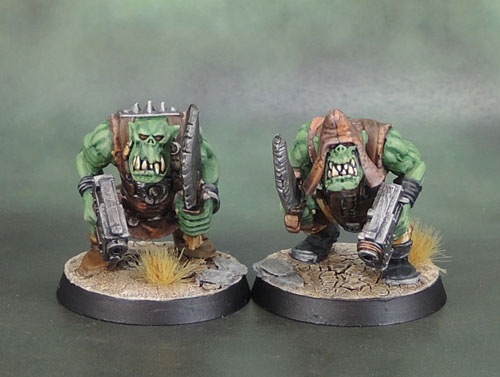 In some fairly pleasant news, after painting these four, I’m almost down to single digits on the number of Orks outstanding from my initial combat patrol force from 2005. Of course, that includes the Nobz and Warlord, so they’ll take a little longer. And not counting the grotz…  and then there’s plenty more Orks to paint after that!  But them ones following will be “new” ones joining the force, and some more Oldhammer Orks. Maybe I should get onto the Diggas I started back in the day and get them finished before starting a whole lot more new stuff? 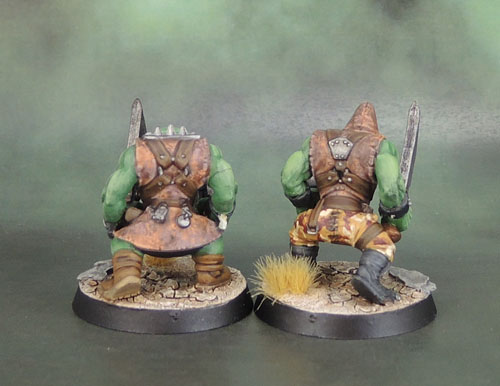 A note to Ann – this is what I mean by washes over the top muddying up the camo (there’s an actual pattern under there). Still, these guys were essentially following the directions for a recipe, and I was taught the first time that you follow the recipe for something quite new, to follow them precisely – and then very it to taste the next time. Funny, the other guide from WLG has resulted in a pattern that looks NOTHING like this, despite them both being for Autumn Platenenmuster…