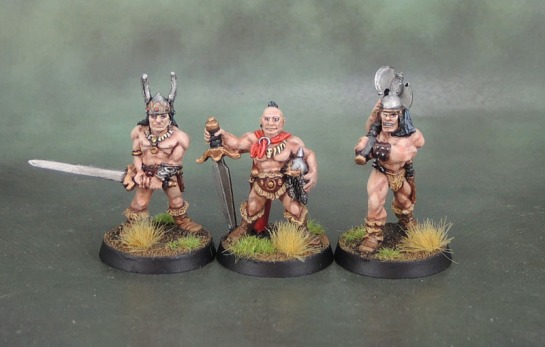 Ok, so only our friend here with the double-bladed axe “Gerloc” actually appears in the 1987 Citadel Journal under the F3 banner, but the other two models are both variants on “Gudrud”, who is on that same page, so I’m comfortable with placing these in the same vintage.  A further variant appears in the 1988 “Blue” catalogue under the Barbarian range, along with a Valkyrie-styled figure who I kept in a baggie alongside the boys here for many years. She’ll be painted alongside the Shieldmaidens and Valkyries from Foundry. 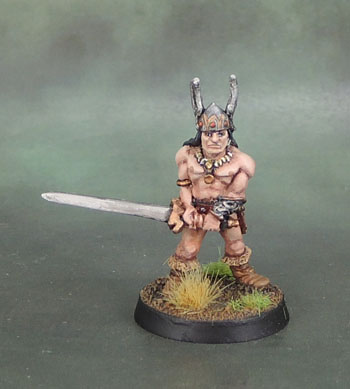 This first figure clearly draws heavy inspiration from Frank Frazetta and Boris Vallejo’s Conan artwork, as do so many barbarians from so many ranges. 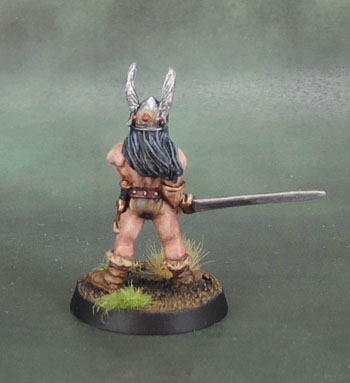 This figure was a real motivator for me to learn new techniques for painting black hair, which (let’s face it) can be a right pain in the arse, since we don’t want it to look blue, or grey, or dark brown. Hopefully I’ve managed to pull it off (thanks, Duncan!) and if I haven’t – blame Duncan! 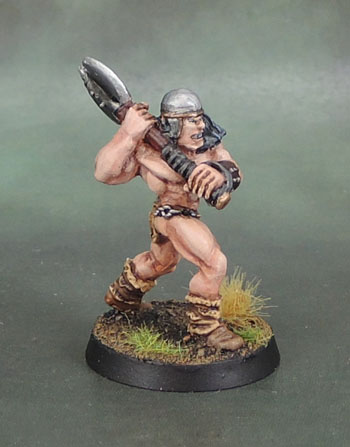 Gerloc here is pretty much also Conan. The spike from his helm was lost long ago, but at least I managed to keep the rest of him intact enough over the years. 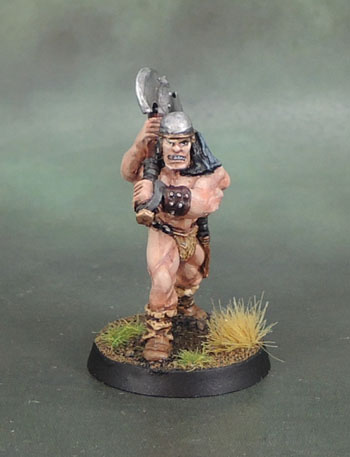 I painted these three together, and tried for a slightly more tanned look to their skin than my usual Caucasian skin without appearing too ruddy or too orange. Not that you can really tell here with no models to compare the trio to. 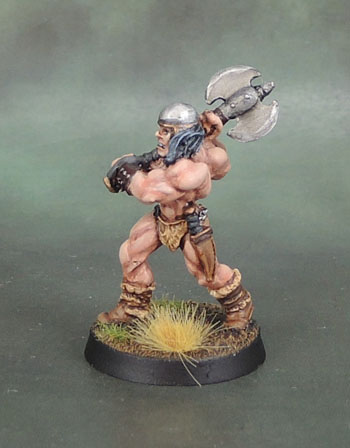 Also on these three, I avoided painting on any tattoos, as I’d be temped to with any models that have a lot of muscular skin showing. Given that they’re old-school models that are a representation of a particular style of artwork (Frazetta, Vallejo) I left their bare skin bare of ink. 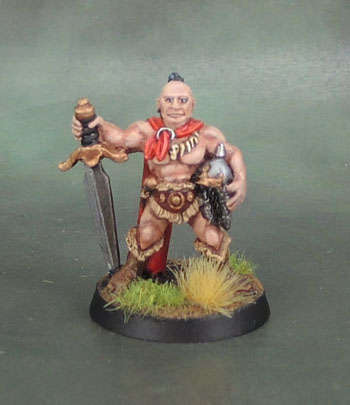 This third figure is actually not Conan! He looks and feels to me like a barbarian warlord. The stance, topknot of hair, helm under his arm and especially his cape really work together to suggest a veteran of many battles who now leads a party of warriors to battle. 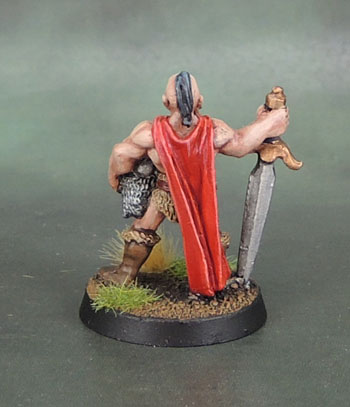 Of course, his stature being that of a figure circa the late 1980’s means that he looks like a peon when stood next to a newer Barbarian from pretty much any company – let alone something like a Khorne Bloodbound (his spiritual successors), so he may well be relegated to veteran warrior or even a regular warrior/cannon fodder when/if he’s used in any games.

I was painting a similar Chronpia model alongside these guys, but he got bumped at the 11th hour so I could concentrate on this trio of truly old-school models. He’ll be done soon, and the four shall again be united!

Finally – a note and shout-out to those people whose Blogger/Blogspot blogs that I follow – especially Curis and The Responsible One. For whatever reason, either my computer, or my browser, or something is screwy and so when trying to leave a comment in Blogspot blogs using my WordPress account often (almost always) throws me into some weird loop of selecting my username and “publishing” my comment, but then it goes back to selecting my username, and then round and round we go. So I might not be commenting much – but I’m still out here watching and reading! And if you’re unfamiliar with their blogs, you should definitely check them out!