I’d originally planned to post up a WIP update on my Great Unclean One today, but… it’s not gonna happen. He’s currently outside with the 2-part epoxy I’m using to mount him to his base drying. He’s too heavy to trust superglue, you see. Instead, you get some more of my “warm-up” figures that I started on to get to grips with painting Nurgle Daemons.

This second batch of Plaguebearers are from the third range of the Daemons. The second being an abominably bad range of models sculpted by Aly Morrison and/or Colin Dixon in 1995/96 (the old catalogues are contradictory across their volumes, but at least they credited their sculptors back then). These models were released alongside the Warhammer Armies: Chaos Daemons and Codex: Daemons books, and are a big improvement over the previous range – though I still prefer the originals. The only exception to that is the Musician/Bell Ringer, who was released in 2007 as one of the three command models to go with this range.

What this range of Plaguebearers did well was show the dour and uncomfortable side of Nurgle’s lesser daemons. With many of their limbs either mutating into maggot-tentacles or having them emerge from their bodies, the smiles and grins of Kev Adams’ range were gone, to be replaced by pained and twisted expressions. I didn’t like these models for the longest time, but now they have kinda grown on me. 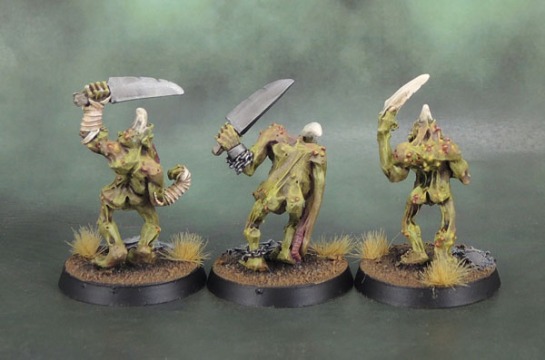 I honestly don’t even remember when or how I ended up with these. I must have found them in a (Nurgle) box a couple of years ago, then took the first 14 our to paint (these ones, plus the previous post) before they sat in limbo for ages. More recently, I opened up a (Nurgle) box while looking for the Great Unclean One that I’ve been painting for Decembuary and found a bunch more unpainted Plaguebearers from this range and the Dixon/Morrison range. It even turns out that I have all but one of the models in this range, the missing model being #2. Model #1 is not painted in this shown batch.

And so, yes, with the previous, original Plaguebearers painted up combined with the nine here, we have 14 Plaguebearers. Or two groups of 7. No surprises as to how that happened.

After (re?)basing them on 32mm bases, I sprayed all 14 of these Plaguebearers with a light green. At that point, they sat around, unloved for a VERY long time. Recently, (as in a few months ago) I’ve looked up some tutorials and ended up giving them a wash of Athonian Camoshade as per Duncan (and others’) videos. Unfortunately, they were going over white bases, not light green, and it gave these models an affect that I didn’t really like. They then sat for another long time. When I decided to paint the GUO and (hopefully) FW Daemon Prince, I decided to get these guys out again to use them as practice for the big boys. Experiments in varying their tones by using Bugman’s Glow skintone blended into their otherwise-green flesh on body parts like elbows, knees, knuckles and a little on shoulders and elsewhere seemed to work, and things like the purplish worms and tentacles also made their way across to the larger daemons.

Of course, the next time I come to paint some Plaguebearers, I’ll vary the colour somewhat. That is to say I’ll batch paint another 7 or 10 or 14 of them in a new, consistent shade, and when they’re combined and mixed in with these 14, we’ll start to see variation between them within their units. I’m thinking perhaps a batch in light browns, and another in a pale off-white.

Not counting the GUO, I have a little under 30 more metal Plaguebearers left to paint now. Then a pair of original Beasts and then Epidemius to paint to clear out my Nurgle leadpile. I’ve also got the Forge World GUO and a couple of other big boys, plus some Plague Toads and Blight Drones do to in resin. After that I can properly begin to get to grips with the newer plastic releases. I’m not sure how far I’ll get through it all in 2018, but for the time being, I’m keen to smash through a whole lot of Nurgle. Wish me (and my attention span) luck!