Today we have another WarZone 1st Edition model that I’ve literally just finished up and photographed – an Imperial Blood Berets HMG Specialist. Again, this one is still available from Prince August for anyone interested in picking one up themselves. I started this model back in the 1990’s but never finished it. I actually collected enough figures for an Imperial force in WarZone – both the standard English/British models as well as the Highlanders, but never finished painting any of them or managed to play with them. At least I’ve now finished one of them! I quite enjoyed freehanding the Imperial icon on his shoulder, and adding in a beret badge with paint, using shades to attempt to make it look like an actual sculpted one.

The reason I picked this one to paint back in the day was simply because I liked the model, but on a related note to that, it got put aside and forgotten as I didn’t have any pressing reason to actually complete it. Not that there was too much to do, but finding him so close to completion last week in the WarZone case led him to getting pulled out, given a new 32mm base and having those last parts of the model completed. 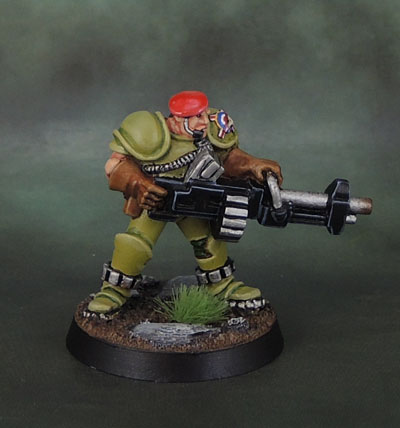 The armour and scheme is pretty simple, but I’m okay with that. It’s a 20-something year old model that’s been completed after 20 years. The paint is clean but decent – and more importantly, finished – That’s it really, and good enough for me once again. – not too much story behind this one, but it’s another neglected model completed for this month’s challenge. Now that he’s been finished and photographed, he can go back to sitting in limbo. At least until he gets some mates to form a unit for games for some purpose beyond being used in board games like Frag!