This trio of weird looking models are the “Sand Crabs” from Shadows of Brimstone – specifically from the Blasted Wastes Expansion set. 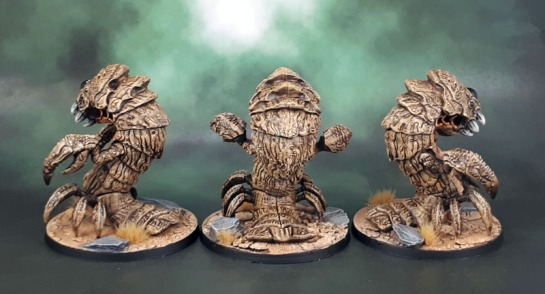 I kept them to sandy colours – because Sand Crabs. Even though they look a little more like Lobsters or Crayfish or Prawns than Crabs, but I didn’t name the bloody things!

The Blasted Wastes expansion was something in the KS included in the Mine Cart pledge that Flying Frog decided to expand and turn into a fully fledged expansion. Backers like myself who wanted to upgrade to the full monty of a Deluxe Expansion (their bold) were able to just add some more money in order to do so. Turned out that instead of getting a coherent boxed Deluxe Expansion, it was just more seemingly random shit throws into the giant shipper box. They did this with a couple of the extra-extras and expansions that were essentially advertised as boxed items in the original KS. Really gives a feeling of Figure it out yourself, fuckers!

Sand Crabs face off against some desert-dwelling Orks!

It looks like the other models in the same set are not-Tusken Raiders, but I’ll get to them when I get to them. In the meantime, there’s another three models finished! I figure that they can pretty easily be used as things in the 40k universe. Ambull Proxies, anyone?