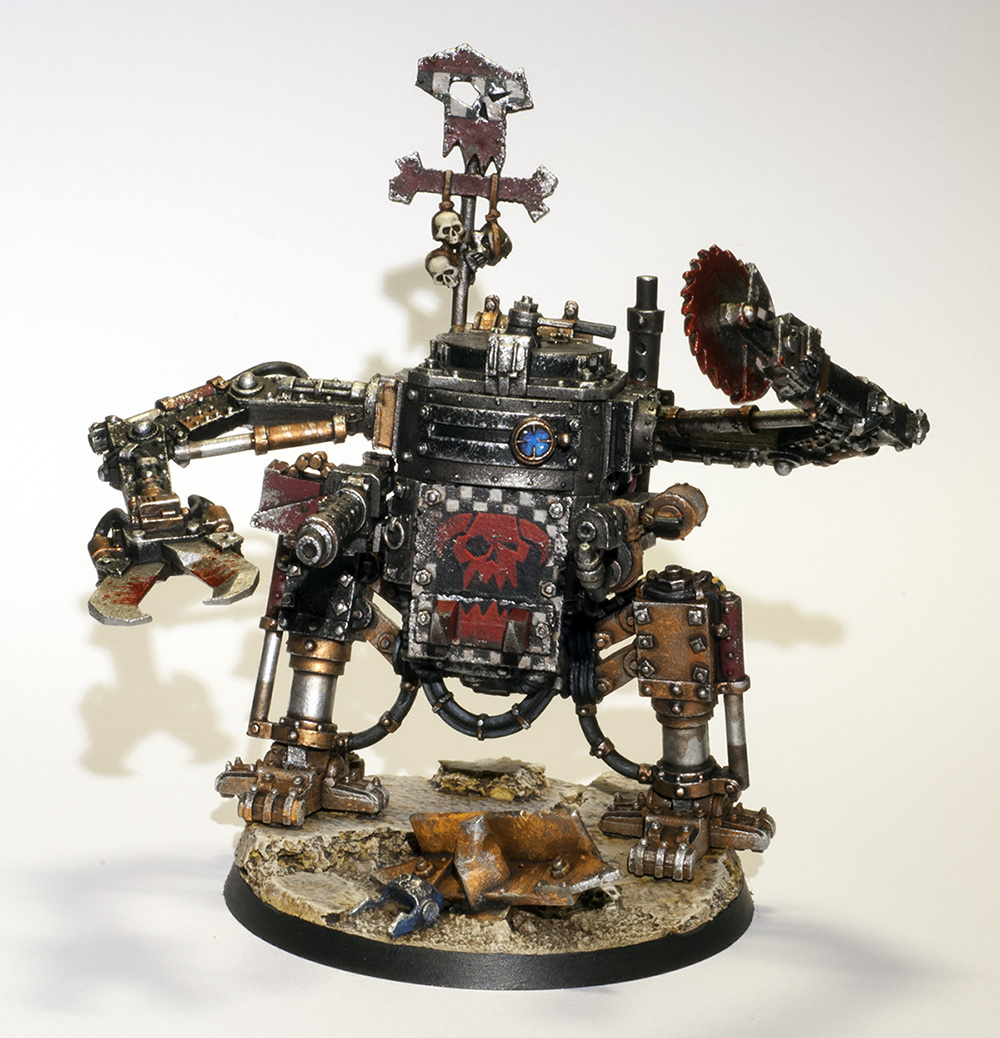 mcmattila has contributed once more to this last month’s challenge with a really nice Ork Dreadnought/Deff Dread. It appears to be the previous version in metal. and he’s done a bloody nice job of it. I especially like the sharp lines and highlighting on the freehand red Ork Skull iconography across the main body. I also like the work done on the model’s base.

Buck Surdu from Buck’s Blog went to town this last month with 1/48 (28mm) armour – Completing a ton of armoured vehicles. The first two are a pair of Assault Guns based on some green army-man tank chassis, with the upper hull and main weaponry scratchbuilt. The next ones are a pair of Soviet T-26 Tanks, followed by a T-26 with 37mm cannon. Wrapping up Buck’s armoured output for November are a pair of classics – the KV-1 and KV-2. Quite an impressive output for a single month, I think you’ll agree!

Argentbadger, also known as The Bovine Overlord completed this Barathrum, which is a “named” and unique Warjack from the Cryx faction in Warmachine. To go with that, AB has painted the model in a scheme that’s much more interesting than the standard Cryx scheme or silver and green. Indeed, with the gold edging and black it wouldn’t look out of place in a Black Legion force! There are plenty more photos of Barathrum from additional angles on his blog, so go check them out!

Dave Kay, from Scent of a Gamer completed the Ape-X model from Reaper’s Bones line. Cyber certainly qualifies for Mechanical November, and in his post, Dave also came up with the term “TechNovember“, which will definitely be the new name for this challenge next year (and I’ve since been using it this year, anyway!)

Mark Morin has also shown us that Soviet Tanks have become a bit of a theme this month with his 15mm KV-1a platoon, which he’s painting for use in “What a Tanker” a game who’s title makes me giggle a little each time I read it. Other Aussies, Brits, Irishmen and Kiwis will get it. 😀

…and to even things out a little with all of these French and Soviets, a few for the Germans – three StuG IIIA assault guns, a Panzer IIC and a Panzer IIIE. You can even see the whole lot in action via Mark’s subsequent post and battle report.

Krautscientist from the Eternal Hunt completed an extensive conversion of an Imperial Knight, turning it renegade and recreating GIlgamesh, the Renegade Knight that was completed back at the end of 2015. There’s just one little tweak, though…

I think you can see what he did there…

Finally, Krautscientist completed his Kill-Team Ulrich, with the above three Power Armoured Truescale Deathwatch models. As always with his stuff, these custom-kitbashed models were gorgeous even before the fantastic painting…

Faust from Double Down Dice finished this scratch-built Dwarf Deathroller for his recently-completed Dwarven BloodBowl team, The Barrier Peaks Brewers. Kitbashed from a collection of seemingly-random items, he’s ended up with a model that you could very easily assume was a third-party “Not-Deathroller”. Faust’s post includes a bunch of the WIP shots, so go over there if you’d like to see what goes on inside the head of a mad dwarf engineer!

Renowned Scratch-builder Just Needs Varnish has allowed others to do the scratching this month, with some 3D-printed, 1:72 WWII vehicles, a Netherlands East Indies Army Marmon Harrington CTLS light tank and a Japanese Army Nissan 80 truck. As always, the exact colours used in their painting have been properly researched and chosen, for a really nice outcome on both models!

Thomas from High Times on the Eastern Fringe has completed a rather epic project – a heavily kitbashed and converted Forgefiend for his Thousand Sons force. This beast took several years from start to completion, but I’m sure you’ll agree that the wait was worthwhile! This beast will certainly have an intimidating effect on the tabletop, so I can only imagine his opponents going all out to kill it off (while his other units implacably advance…)

…and the pair of bikes, partially hidden behind the car!

Maenoferren22, of the Bogenwald blog painted up some old, old models that really are as rare as hen’s teeth – an original pair of cars and a pair of bikes from Games Workshop’s Dark Future game, circa 1988. For me it’s personally very cool to see these classics painted up and resurrected like this, especially as they’re so rarely seen or even mentioned these days.

Pete S /SP of SP’s Projects Blog painted this collection of Cold War Micro Armour – here we have a mix of US Army vehicles: A Command stand and a company of M1A1s plus extra ATGM, mortars and M163 VADS with Vulcan AA cannon.

Pete’s A-10 Thunderbolt (or Warthog!)

Not to leave the Air Power short, Pete also painted up a trio of US and British air support for the ground pounders. Seeing all of these really makes me want to buy into a “modern” armour game. I wonder if I can get Marouda to buy me something appropriate? 😉

Speaking, as we just were, of classic models, Tarmor from Dragons of Lancasm has completed another truly classic model from the past – the Chaos Dreadnought from Space Crusade – along with all three weapon options able to be swapped in and out as needed.

And once again, speaking of Space Crusade, Tarmor also completed a foursome of Chaos Androids, the forerunners to the official launch of what we now know as Necrons. I wonder how many more Space Crusade models Tarmor has to go before he’s got a fully-painted set?

…and very literally bringing up the rear, we have Pandora’s Bit Box, from Krakendoom Cool has completed an impressive looking Imperial Knight, to be allied to his Adeptus Mechanicus Army. This particular Iron Giant was also the subject of a basing tutorial for “heavy” models on the same blog, which is also well worth a look-see. Let’s see if Pandora can convince Warbringer or Krakendoomcool to put something warlike and cool up for December’s challenge!

As a little bonus, there’s also Comrade’s Wargames‘ PatrickWR‘s models for Orctober, which I missed at the time (due to lack of linkback). I’ll edit them into October’s community round-up when I get a chance (probably next weekend – I’m about done with blog-posting for a few days at least after doing this bloody thing over the last two days!) There are the foursome of Orcs, and also their Goblin boss. In my opinion, I think the Orcs especially came out exceedingly nicely.

Finally, my own contributions for Mechanical November, which can be seen in slightly more detail via their individual posts over the last month, or collected in my personal round-up post.

Welp, that’s it for now. I might read others’ posts and respond to comments when I get a chance, but I’ll be taking a few days off posting after this. I’ve got just over a week to get the Challenge post for January written up. Hint: It’s terrain, plus something else as an alternative for those who don’t want to do terrain that I had an epiphany about, and then forgot(!) – so there’s also that.

*Obviously, I’m pretty much guaranteed to have accidentally missed someone despite my best efforts – though I DID get everyone who left a link in the announcement post, so there’s that in my favour at least. Still if you painted something for November’s challenge and it ain’t in here,  just reply to this post with a link to your model post and I’ll edit you in as soon as I get a chance.