Wow. A year now since I last completed any of my Viking models. These two are both from Wargames Foundry, who appears to have redesigned their Viking pages to take advantage of SAGA since I last looked at them. The big lad is “Big Lud Headsplitter” from their VIK043 Viking Berserker Champions set, while his rotund offsider is “Hvitserk the Bold” from their VIK042 Viking Ulfheadnar Wolf Skin Berserkers set. Most of the rest of both packs are already painted and have been shown before in previous Viking entries here, excepting the two banner bearers from VIK043, neither of which actually came with banner poles or heads, so they ended up low on my priority list, but are both on the current tray as well, so hopefully to be completed soonish. Unlike the rest of my Berserkers, I’ve painted the “Big Lud” model as an older warrior who has accumulated some visible wealth in the many campaigns he’s been a part of, and so has more exensive red-dyed clothing as well as brass/bronze weapon accoutrements.

A minor disappointment that’s nonetheless worth pointing out from the Foundry Viking range – a lot of the models shown on their pages appear to come with rather cool looking shields with embossed designs. When I placed my rather decent order with them a few years ago for a number of packs across their Viking range, I got a few shields like the one that Hvitserk is holding in these pictures, with either two or three segments, but exactly none of the ones with the embossed designs. Just worth pointing out to help avoid the same disappointment that I had when my order arrived. 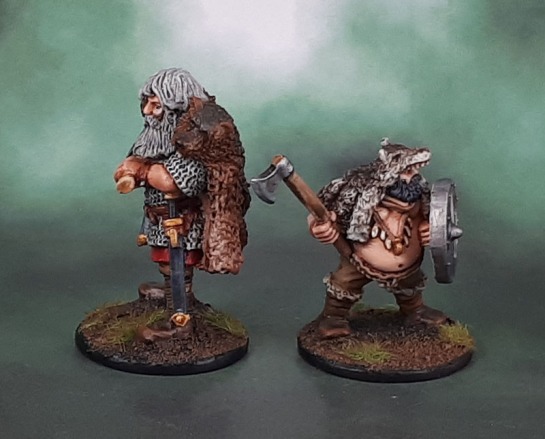 After the next two, that will only leave one more of my started Vikings to complete, not counting the single model I’m using for a …special purpose. Of course, there are a fair few more in a completely unstarted state not even counting the plastics, so I’ll have to make the decision in future trays on whether to forge on with finishing uncompleted/neglected models or whether I try to slip a few more unpainted metal Vikings into the production line…