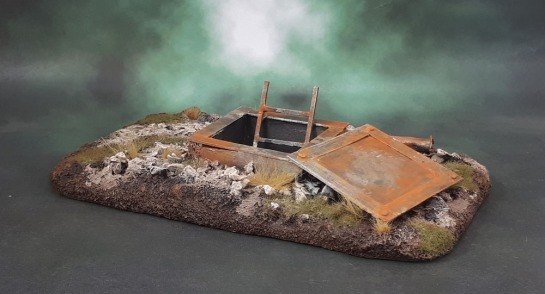 A very simple piece of scratchbuilt scenery today – one I built many years ago but never quite finished to my satisfaction, that also got broken in the interim. It’s been sitting in a box of stuff to get around to restoring and fixing up for a few years now, and so with Dave Stone’s Winter of Scenery Challenge being a thing right now I decided to bring it inside (skipping past The Tray) and spent really not all that much time getting it to the point where I’d be happy to place it on the table again. 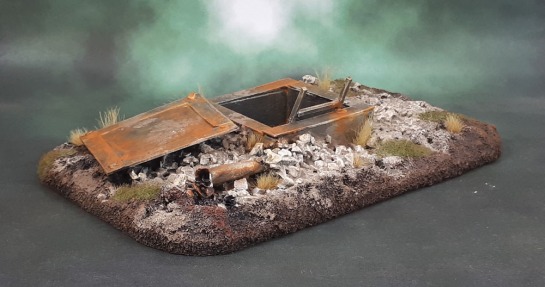 As far as what was needed/worked on – the ladder had broken, so that needed gluing back together, a bit of a repaint of the dirt, some weathering powders, the tufts and all of the rust. I also repainted the sludge coming out of the pipe with a mix of Black Templar Contrast Paint and Water Effects for a nice glossy oily muck look, replacing the luminous yellow-green that had been there originally. The base is made from thin MDF with putty over the top buiult up around a little square hatch made from foam core. The ladder is just made from a length of square modelling plastic clipped and glued together with the rungs, and the hatch is simply some layered card. A little cat litter for rubble/stones and a bit of aluminium tube for the pipe. 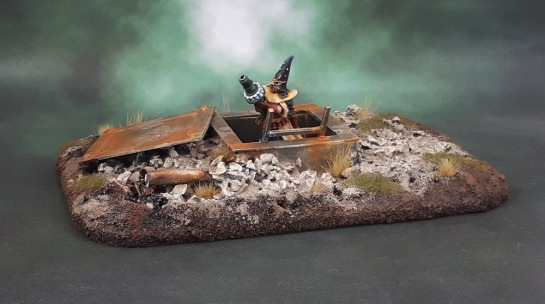 A Necromunda model provides a size reference for us here. I originally built it for both Necromunda and 40k, but I could see it being usable in any sci-fi or post-apoc game, or even various games set anywhere from WWII to moden settingt o near future as well, through to the aforementioend Sci-Fi and Post-Apoc games. I always like a nice, versatile bit of terrain!