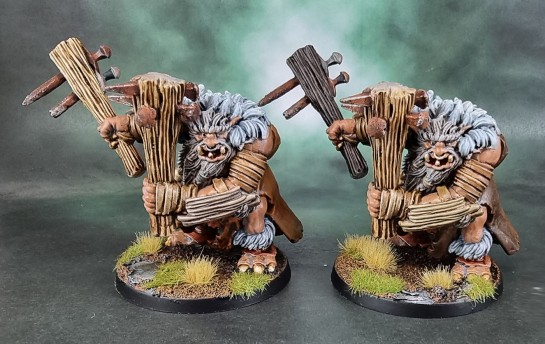 Finally! I’ve completed all six of my Shieldwolf Miniatures’ Krumvaal Lower Yetis. It took me over a year, and three Monster Painting Challenges to get all six of them done – doing them in pairs each time. There’s a lot of busy detail on these, as well as overlapping, very similarly sculpted textures – fur and hair. I really didn’t enjoy painting any of these six – but I do at least think they look pretty solid as painted models – and best of all, they’re done and I never have to paint another one of them again for the rest of my life! In theory, that’s true of most models unelss they happen to be sculpts that are oft-duplicated or multipart or part of a long-rnning series like Space Marines, but in this case, it’s just nice to know. 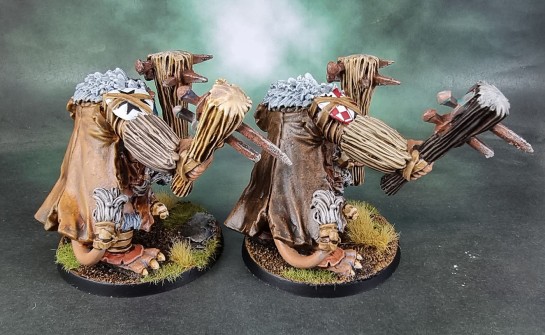 In terms of the paint on this final pair, I gave them slightly different tones on their leather “coats”, and continued the theme of painting the stolen shields as though they’d been taken from members of my own Reisgard regiment that had fallen victim to the smashening – though I definitely do need to add some fanicier shields to the next Reiksgard commanders to fit in with some of the heraldry on these Yeti shoulders. Since they’re also berefit from metal in terms of their own properly wielded weapons, armour, or even buckles, I painted the spikes and swords that have been pounded through the clubs with a pretty heavy coat of rust. They obviouslly maintain those fantastic shields on their shoulders much more carefully than their weapons!

Having said all of the stuff about how much I hated painting these, I do strongly suspect that now that part of the job is completed I will likely become fond of these models – particularly if they see some table use. I’ve based them on 50mm rounds, which is the official size for Yetis (or Yhetees) in Age of Sigmar. I’ll just drop them onto a MDF unit base for Kings of War, though I haven’t kept up at all with the force organisation for the latest edition I’m sure they’ll still have a place in the Ogre army.

I believe that in KoW the six of these things can make two units of three, or one big-arse unit of six. Meanwhile in Sigmar they’d run as a big scary horde of mobs, taking up a lot of table space and making a mess of whoever they encounter, wherever they go!

Meanwhile in Sigmar they’d run as a big scary horde of mobs, taking up a lot of table space and making a mess wherever they go! No scale shot for Berkeley this time – she’s taken on the previous two pair of these and their size can be seen in either of those two posts (also, I forgot to take a scale pic)

It’s been a year now since I finished the first pair of these models – Shieldwolf Miniatures’ Krumvaal Lower Yetis which I have had for several years since the Kickstarter they were released as part of. I’d done a little on them on and off since I first started working on all six a year ago, but the fact is I haven’t really enjoyed working on these, so it took the motivation of a painting challenge – in this case Swordmaster’s Monster March Painting Challenge – for me to get motivated to Kick Out The Jams and just go hard on getting them done in the past couple of days after (finally) basing them at the start of the month.

Now technically, these just missed the deadline for Monster March by a day, as I finished them in the evening of April 1st, but hey! People are painting cavalry for Monster March, so a little flexibility in the “rules” is fine, as the main thing is really that sweet painting motivation – and I did need that motivation to get these done for reaosns I discussed in my post on the previous pair of these.

These casts wren’t really up to Shieldwolf’s usual high standards, being cast in a shiny, hard yellowish resin that reminded me of some of Forge World’s early stuff, or the stuff I’ve seen from people who buy their “GW” miniatures from China. There were also some casting lines and holes in the casts that I had to fill with putty. Not the end of the world, and they paint up just the same, but I personally prefer working with Shieldwolf’s much nicer grey resin (I need to finish assembling and paint that Mammoth!)

Once again, as with many of the models that I don’t especially enjoy painting, I do like them a lot more now that they’re done. There are of course one last pair of them, which I appear to have somehow lost on my painting desk (yes, it’s that messy – I need to set up a new “Tray”). If I can find them in the next couple of weeks, I will absolutely attempt to use this year’s Monster MAYhem to motivate the completion of that final pair of these.

As is the style of the blog, Berkeley is on hand to show how big these guys actually are. And to reiterate – if you’re wondering why they’re not on snowy bases – simples! They’re not fighting next to where they live. They’ve come down the mountains to tag along with whichever army I drop them into (Ogres, probably) and raid the puny folk!