Since the last update, I moved house, finished up all the craziness at work at the end of the year (at the same time) and have been unpacking while Christmas and the New Year all happened. 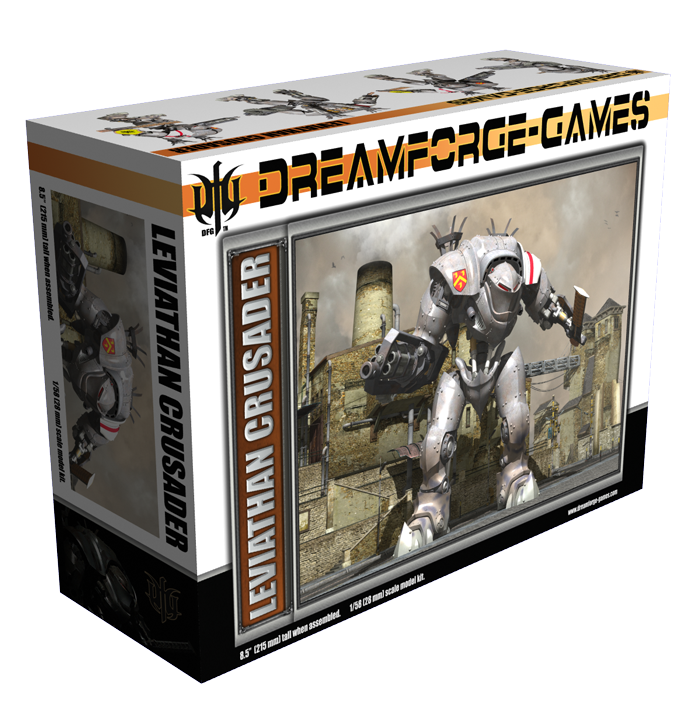 Dreamforge Games, AKA Mark Mondragon‘s project to create some Leviathan Crusader giant mecha to go with his game world that also features Eisenkarn (aka WW2-inspired Space Germans) and some other forthcoming stuff. The mechs of course come in two scales – 15mm, so you can use them in your Flames of War games (?) – or they just happen to work as excellent Dreadknights. Similarly, the 28mm ones would just happen to work as Imperial Knights, though a lot of people plan to use them as Proxy Warhound Titans. As the Kickstarter continued to do gangbusters business, the scope expanded into variant mecha, infantry (light, heavy and female) and Hanomag/251-inspired APCs. I also went in for some of the heavy infantry and the girls, as they were the best bang/buck as I didn’t have much money left after going in for 4 of the big mechs and 4 of the smaller ones, plus extra weapons….

The first wave of these kits (including the aforementioned Leviathan Crusaders) were of course due to be in backers’ hands during October, and, well, you should be used to this by now.

The latest update forecasts it being in Wargames Factory’s (Mark’s production partner) at the end of January, so if I’m lucky, I might see my toys at the end of February! Only 4 months overdue! Yay!

The difference between this campaign and some others in that regard is that Mark has kept his backers updated regularly with information and pictures – rather than disappearing into the ether for a month or more at a time.

So, am I happy? Well, Not as such. But I’m not bent out of shape either. Honestly, when the campaign finished in Mid-September, I knew there was no way they were going to arrive in October (WTF was Mark thinking there?) but I did hope they might arrive for Christmas. 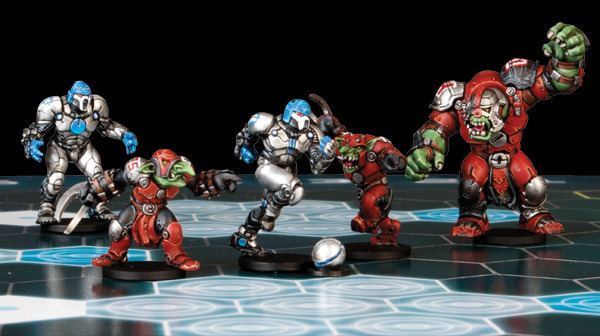 Dreadball, by Mantic Games. I have to admit that I was quite pissed off when this one was first announced. I felt that Mantic should have finished delivering on their Kings of War Kickstarter before starting a second one and going back to the till. I was also a harsh critic of the start of their Kickstarter, with essentially “suuuuure they weren’t going to make the ref plastic” and the like, as it was all-but-guaranteed with a “goal” of $20k, and while I do still retain many of those beliefs about the early stretches, and still hold that things like making the Hex bases a paid-for add-on, and the short-numbered teams of 8 players (to sell more add-ons) I do have to also give Mantic a lot of credit for actually setting a date and then going balls-out to make that date.

Apparently they got fucked over by the same Chinese printer that screwed McVey’s Sedition Wars project (took the money and did a runner), so the story goes that they sourced another printer, and got the stuff on a boat in time to meet their deadlines anyway. On top of that, apparently the games were supposed to come pre-boxed (which was why they changed their “all rulebooks will be signed” offer to a shitty signed pamphlet). Then when the stuff arrived from China, the boxes weren’t assembled or packed, so they closed down the Mantic Warehouse for a week and had all their staff making Dreadball boxes. While I felt that they should have gone back to the signed rulebooks (because that’s just a lot cooler than a pamphlet that half of us are guaranteed to lose), it’s a minor niggle.

In the end, they got out the first wave of stuff out to backers in time for Christmas. On top of that, they delayed the shipment by a few days and also managed to include the first wave of MVPs in the shipment, and also got out the January wave of Dreadball boxed games. They also sent orders out in a way to help guarantee that everyone in the world would get their by Christmas, so stuff to Australia et al went out first, and UK stuff (with fast local delivery) went out last. That’s the way to show all your customers that they’re valued – Kinda like a fuck you to CMON.

Oh, they also sent stuff into the UK retail supply chain as soon as they got them, with the result that some UK retailers and shops running demos had their toys a few days before backers in the UK, sans all of the extras, of course. This of course sent bits of the internet into apoplectic fits. But really, the campaign said December. You got your shit in December. Man the fuck up and shut the fuck up.

Through all of this, they also managed to continue giving updates for both DB and KoW, including some much nicer sculpts than you’d expect from Mantic’s earlier stuff…

(ignore the “donate” part of the banner!)

Bombshell Babes, by Bombshell Miniatures, aka Patrick Keith. Another campaign I wasn’t impressed with at first, since the basic level to buy in came to $15 for one figure, which is frankly ridiculous, even with shipping included. Once you got up to $150 or so, the value scaled up reasonably, and the ability to choose exactly which figures you want was also a bonus, rather than being stuck with the figures in a pre-defined set.

This one’s due …this month actually. It appears that it’s on schedule, and Patrick has been keeping his backers up to date with regular updates and greens and so forth. This being Kickstarter, the figures will probably begin to be mailed out on Jan 26th, and overseas backers will be sent last. 😉

Taking that and International shipping times into consideration, I’ll expect to see these sometime in Feb, hopefully.

Mongoose Publishing’s Judge Dredd Kickstarter. I’ve been a fan of Dredd for a hell of a long time, and so I went in on this one despite not really wanting to do anymore Kickstarters in 2012. This one leveraged a lot of their existing model boxed sets as rewards in order to get money to put together a bunch of new sculpts. Mark from Mongoose listened to feedback, and allowed people to pick and choose which of the 10 boxed sets we got, rather than one of each of the existing ones. With that in mind, I got a whole bunch of Judges and only a few perps. All of the existing boxes have already arrived, and so I’m waiting on the repack boxes (other pre-existing Justice Dept single models repackaged into boxed sets) and of course the new sculpts.

This one was due in November, though that doesn’t count the stretch goals or the repack boxes. I actually received all of the stuff that was promised in November in 3 separate boxes from Mongoose on the 1st, 7th and 15th of December. Which is not too shabby, especially considering that Mongoose’s production facility is in the US – so things got messed up a little by Superstorm Sandy in getting product over to the UK in a timely manner.

There has been a reasonable number of updates showing off new sculpts and such, so as long as they keep up on this, and keep the figures coming (repacks soon, I hope!) then I’ll continue to be happy.

Kings of War: More sculpts shown up to Christmas, as noted in my half-update. Their new stuff is using a lot of Remy, who used to sculpt for Rackham. I’m one of the many people who are surprised at the sudden turn to high quality sculpts that Mantic have taken. This is only a good thing.

Avatars of War: Felix has put out one or two of the units. Characters (including the standard bearer) are set to be done last. People are starting to hope out loud that he can manage to concentrate on the Dwarfs long enough to get them all out and not get distracted by new shiny to sculpt. I’ll no doubt buy some when they hit in-stock retail – for the same price as his KS offered…

Reaper: They’ve been quiet for a little while, though they showed a great big fuck-off dragon a few weeks ago. The proportions of it looked a bit wonky, but when they ship that stuff it’s going to have to come in a fucking big box. In fact, due to Australia Post’s regulations, it’s probably going to have to come in 2-3 boxes. So they should just ship me my paints now! 😉

Stonehaven: The little white box of figures arrived a week or so ago, right when I was in the midst of moving. I still haven’t had a chance to look at them. October date, figures arrived in December. From a little startup outfit just getting into the game, who also bothered to keep up updated, I’m alright with that!

Pirate Goblins: Well, I finally got in contact with Bruno, who has said that he’ll fix me up with that extra Goblin I was after. Due October, it’s now January. Last update was around the 15th of December with Bruno saying that they’d be sent out between the 17th-20th of December. I guess I should expect to see them in a week or two?

Red Box Games: Apparently there were issues with the casting screwing up some of the figures, so stuff was sent back and forth between Tre and the casters – Trollforged. Some people have their stuff, there are potential issues with the round shields. Not sure what Tre’ has back or how much more he’s waiting for, but I’m pretty sure my stuff hasn’t been sent out yet, so again, I’ll hope to get this October KS in hand by Feb. At least the delays forced Tre to give up on his cockamamie plan to start another KS in Mid-November…

Studio Miniatures Zombies: Well, they did arrive. Unfortunately in what I presume was a rush, Stuart completely missed our chain of back and forth emails stating which survivors I was after and “no problem” on getting German Zombies as well and additional payment doubling my pledge order. He was apologetic when I emailed him with my “um, I think you sent me someone else’s order, because this one is really wrong” and has promised to send the stuff out to make it right. Since all this happened just before Christmas, I’ll expect it in a couple of weeks.

Next time: Trollforged Assimilation Alien Host and some commentary on Kickstarters I was initially in for, but backed off to $1 pledges. Probably not worth writing for a couple of weeks so we can see how some more of these pan out…