So it’s the next set of pictures and commentary of the recent order I received from Maxmini. In my last post I looked at the two types of Mecha Egyptian heads that they offer. This time it’s a bit more varied. Once again, all images are clickable for bigger versions. 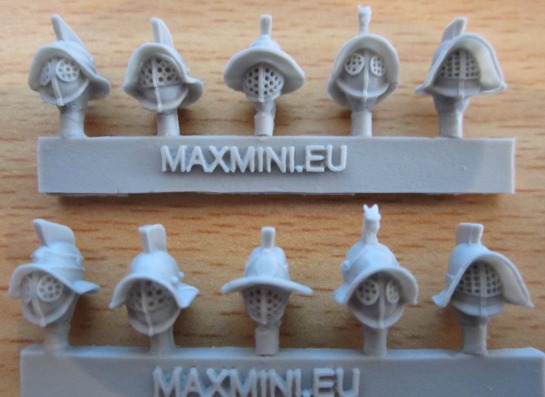 First up are the Gladiator helmets. I bought these without any incredibly firm use for them, simply because they looked so nice. I’ve been considering using them as heads for Pre-Heresy-styled World Eater Gladiators. Maybe Khornate ones that still have their old Relic-aged helmets – or I’ve just realised as I’ve been typing this that they would be perfect for my Iron Warriors berserkers that I’ve been intending to build for the last 5 years – I’ve just been needing a way to make them unique, but distinctly both berserkers and Iron Warriors without using the “bunny ears”. Now I’ll have to buy a few more… hmm… 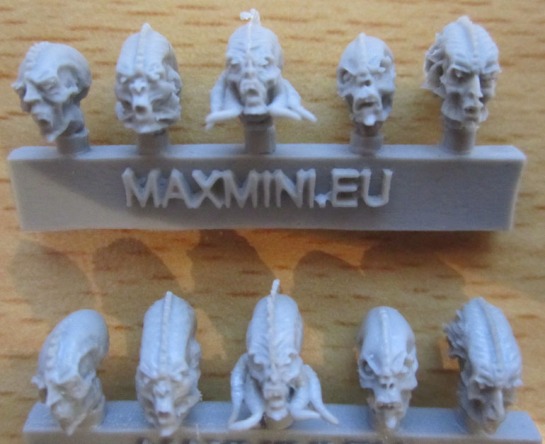 Next up are the Alien Hybrid heads. Again, I bought these without any immediate purpose. I’ve got a bunch of old-school Genestealers and Hybrids that I need to get around to sometime, but they’re not a priority in my paint queue for the time being. As you can see, they’re finely detailed, though they’re quite small – more truescale than heroic. Having said that, I’m sure they’d work well on top of a guardsman’s body. Something I’m happy to have in my bits box for the moment when I’m building something and decide I’ll need them.

MaxMini Biohazard helmets. Unlike the others, I knew exactly what I wanted to do with these from the moment I saw them. These will be going onto the heads of Plague Marines and Death Guard. When I got these, I opted out of the one sculpt that didn’t appeal to me (in execution, not concept) by asking the MaxMini guys for a custom mix. Since they’re able to do that without a hassle from a lot of the items in their range, it was no problem, and I picked up an extra pair of the “diving bell” sculpt, which I really like. I’ll probably pick up some more of these down the line as well, as the Diving Bell also has a lot of potential outside of the specific CSM use I plan for most of them.

Finally, for this post at least is the Tribe of Black Lotus Helmets. A bit of a long, unwieldy name, yes, but some great sculpts. In the past I’d considered these but passed, as I didn’t have a specific use for them, but now I’ve pretty much got two solid options for them, and will probably go with both. These will be used in a mixture of a Greek-themed Space Marine force (no, not Minotaurs, though I’ll certainly use some of their Forge World parts) and also steal a few of them to use on Various Slaanesh Champion and Emperor’s Children figures. (2017 Edit – Erm, yeah, I am actually doing Minotaurs now, using these on the odd commander-type model!) 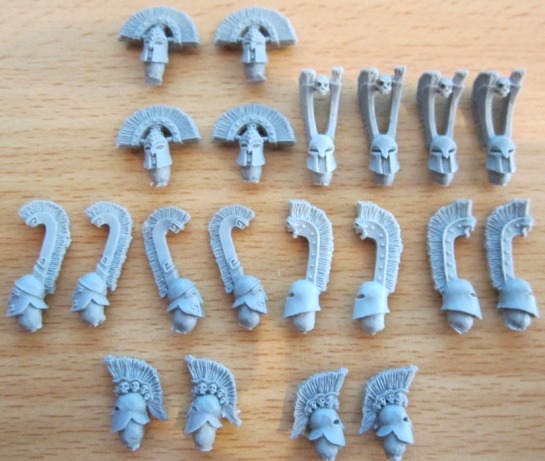 As you can see, these parts are pretty much flash-free, with just a small bit of cleanup required on an occasional piece. Clean bubble-free casts, and quality (non-itchy!) resin.

There’s a few other nice-looking head/helmet styles on offer from MaxMini as well that I’ll be purchasing in the future to check out. The Space Police, Steam Knight Noble and Zombie heads are all ones that look good and I’ll likely be purchasing and reviewing in the future, so look out for those (in a couple of months.)

The next post will be MaxMini stuff, as I’ve got some jump packs and other odds and ends to review. After that, I’ve got a bunch of stuff I’ve bought from Kromlech, Scibor and Puppetswar to photograph and review, so the Polish Resin series will have a fair few more installments to come!

As always, I hope people find these shots useful!