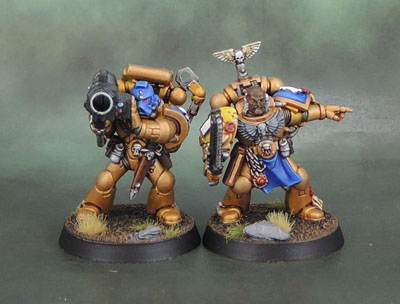 I started painting this Tactical Squad of Celestial Lions on Christmas Day, and was originally on track to finish them before the end of 2017, but then it didn’t work out that way as I ended up busy with a bunch of other things. Still, I managed to complete the squad towards the end of January.

The main reason it took so long was actually this pair – the Sergeant and Missile Launcher guy. Compared to the rest of the squad which I was able to pretty much batch paint, these two ended up being much more slowly painted individuals, due to the amount of individual fiddly bits between the pair of them. I also decided to paint the Sergeant’s right Pauldron with Imperial Fists livery – as a heirloom item from their primogenitors. In slightly battered condition. 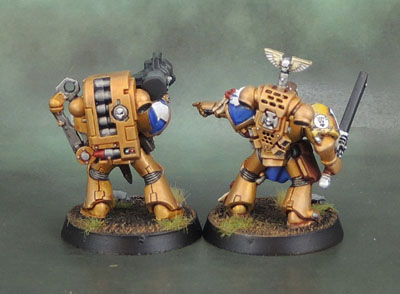 The eagle-eyed amongst you will have noticed by now that these guys lack a squad badge on their tactical arrow. This is by design. My cunning plan is to paint another Lions Tactical squad worth of figures at some stage in the not-too-distant future, and then mix the two sets of figures together.

The next 10 marines will be made of a mixture of 2nd Ed metals, multipose plastics, and maybe some FW resin/Calth plastics to give a variety of poses and armour types. I’m using 3-d printed icons throughout.

When the two sets of figures are mixed together, it will remove a lot of the repetitive redundancy that they have at the moment, all being monopose push-fit figures from the Assault on Black Reach starter set. (40k 5th Edition starter, 2008). At that point I’ll either organise them into numbered squads or decide to paint a third set of 10 tacticals and really mix things up once they’re completed.

Here’s the completed squad alongside the two Primaris Lieutentants from Dark Imperium (40k 8th Edition starter, 2017). I’ll have to do some character models and probably a Dreadnought and vehicle – which will then place them firmly in “small playable faction” territory. I’ve got some other marines I want to finish off before I start to do that, though…