Last November, with the release of the new edition of Necromunda imminent, I dug out some of my old gangers with a mind to updating some and completing others. Well, like so many projects, stuff happens and they get put to the side. The same thing happened with my planned completion of my 3rd Edition Chaos Dwarf Blood Bowl team (maybe I should add them to the list for next month’s challenge?)

Anyway, while these figures have stayed within the dozen or so figures in my “do these next” section, they’ve kept getting overtaken by queue jumpers of all description, so now I’ve finally gotten at least the first two of five done, due mostly to Alex’s Fembruary challenge.

Both of these figures are 1st Edition Necromunda Escher Heavies. I simply weapon-and-backpack-swapped the pair of them, since in 1st Edition Necromunda, leaders could have a plasma gun and I needed a figure to represent that. As a bonus, the “Heavy stubber” model featured braids, which resembled Susan Veraghen, who was a truly kick-ass warrior in the Grendel: War Child mini-series, as well as in some of the subsequent stories told in issues of Grendel Tales.

For my Necromunda gang, she was renamed Zarina Veraghen, and was my gang leader. Not Escher, though. My gang of those days was called “Grendel” and was composed of both male and female figures. I used different gang templates over different campaigns (and only Van Saar once or twice, despite “Techno!”)

The other heavy with mask remained a heavy, and was used simply with the Heavy Stubber, which I tended to use as my starting heavy weapon – I think, it’s been awhile!

I’ve always been happy with how the heavy came out. I think she’s a good example of having the tiger-striping on the leggings turn out well. 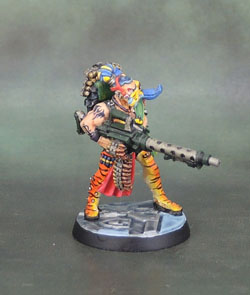 She’s also a good example of tattoos having turned out quite well. If I were doing them today, I’d have mixed in a bit of flesh to give them that sub-dermal look, but since I’m already happy with them I decided not to mess with it when bringing these two models up to date. I guess her tatts have been recently touched-up.

Really, this pair are very much the same as in their original state as far as the paint goes. New bases for the new generation, and a little bit of touch-up here and there is all it took.

If painting them from scratch today, I’d have probably toned down the brightness levels on some of their accoutrements, but I think they still work well enough today, despite being a little garish.

But, you know, new figures painted from scratch, and those finished from a half-done point will probably not have all of the primary colours on them so prominently. Probably.

And here’s the four of them together. Skittles, anyone?