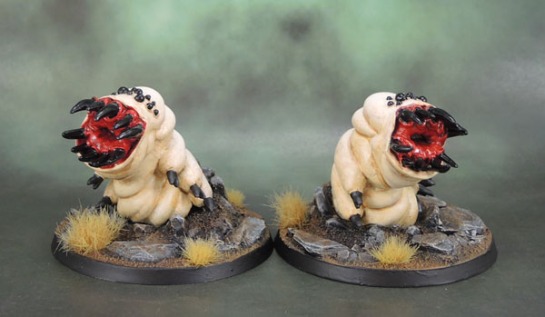 A few weeks ago I was rooting around through a tub of Reaper Bones models when I found a few baggies that piqued my interest. Stuff like wolves and furry stuff – the kind of models that paint up pretty quickly. Amongst them were a pair of baggies originally from my Graveyard expansions (which I’d planned to paint this past summer, but…) Anyway, the “Carrion Worm” models were in there, and I thought they’d paint up pretty quickly. But then after a couple of hours of doing other things, I decided to get my fool self under control and put away those baggies. Need to finish models before starting another couple – or couple of dozen. I was largely working on my Nurgle stuff at the time, Great Unclean One, Mamon, and lots of Plaguebearers.

The next day I realised something. Those grub-looking things might make decent Beasts of Nurgle. I checked them out again, checked out the bases sizes of the new Beasts, got some 60mm rounds out, ruminated, then decided against it again, because Bones is a pita of a material to work with, and I didn’t have the patience for it. A few days later, after finishing the Plaguebearers, I came back to them, still sitting on the table, and started to trim down the mold lines. Within a day or two, I’d given them a coat in thinned liquid greenstuff, and epoxied them down to the 60mm bases. Another week or so, and they were done.

, Edit – Doubledowndice found them on Reaper’s site – US$5.99 each. I’ll grab a few more next time I order from Reaper.  a hell of a lot cheaper than the new, official GW model. Not that I’m too concerned about price. I’ll probably end up with one or two of the official model, but I’m also the kind of guy who will happily use an appropriate model for a unit, regardless of the manufacturer or how “official” it is. I’ve got either one or two of the original release Beast of Nurgle as well. I think there’s one unassembled and one assembled, where I know the “flipper” hand had fallen off, and I keep seeing either the limb-less model or the loose limb. So next time I find one or the other, I’ll put it somewhere same and reunite it with the rest of the model. And see if I can find the second one. And then paint the damned things. 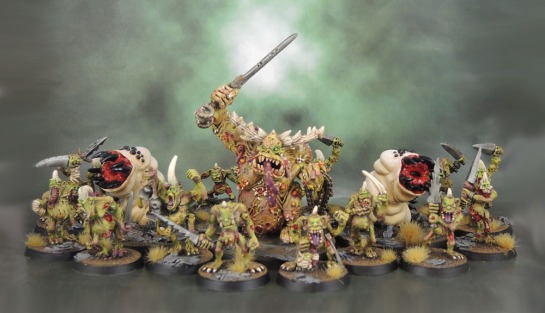 Here’s a quick shot of my growing Nurgle Daemon army.