My final model for the month of December – and as such, of 2018 is this model of Chief Librarian Tigurius, sculpted by Jes Goodwin. As I had a spare, I decided to do a minimal amount of work and use him for my Minotaurs Librarian. A tiny little brass-etch Minotaur over the top of the Ultramarines “U” icon in the middle of his chest, and we’re golden.

He’s a pretty busy model, absolutely covered with bling, but a great one nonetheless. I also think he’s a far superior sculpt to the completely unnecessary resculpt that came later on. I can only guess that the resculpt happened because models of this vintage were often quite flat, and “2D” in their posing. While the newer one isn’t objectively bad, it doesn’t really appeal to me. No matter, I’m sure it’ll be replaced by a plastic Primaris-ised version sometime soon.

In terms of paint, I’ve never been fond of Ultramarines Blue as a Librarian designation, despite not having a problem with White for Apothecaries/Medics, Black for Chaplains or even Red for Techmarines. With this in mind, I still gave a nod to the blue by combining my usual Minotaurs Brassy Bronze with some metallic blue on both pauldrons and his left arm. There’s a golden Minotaurs decal on that shoulder that no-one will ever see, too. 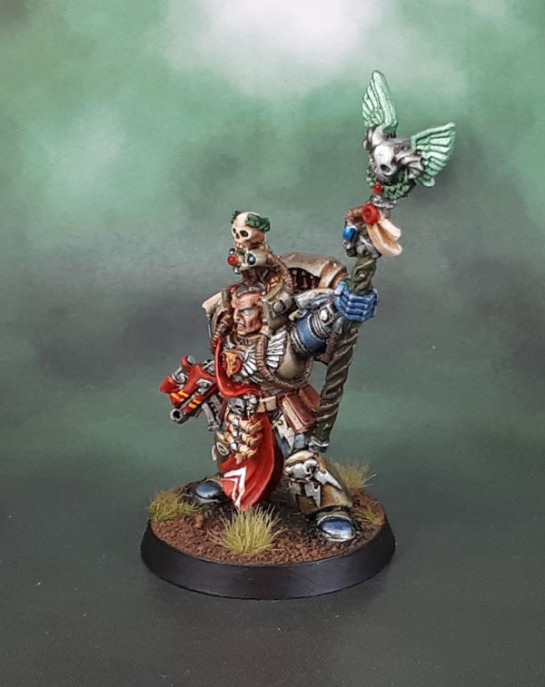 Aside from that, I kept to the usual elements. Mostly using silver and iron for (most of) the skull iconography, but using metallic green rather than blue for his Force Staff. I also did the “glowing eyes” thing using white and Nihilakh Oxide. Freehand Lambdas/Chevrons on his tabard because they fill the empty space in a way that looks good and because I can.

And with that, 2018’s new models come to and end. To wrap up, expect my personal December wrap-up shortly, followed by the Community Round-Up for Diabolical/Dauntless December, and then a 2018 wrap-up/reflection/”New Year”/2019 goals post sometime after that. Probably around the middle of January at the rate I seem to get these things done!