Today we have another old sci-fi model. To recycle and slightly-update some older text:  it’s one of Grenadier Miniatures’ Future Warriors models, sculpted by Mark Copplestone and sold in the 1990’s which I bought, well, rather a lot of. No, sorry, none are for sale, but if you poke around, you’ll find a hell of a lot of them still available today from Mirilton and EM-4 Miniatures, as well as very close relatives from both Wargames Foundry and of course the sculptor himself – Mark Copplestone. All at very reasonable prices.

In fact, here’s the specific pack this one comes from. These models are just part of the post-apoc looking models that are rather perfect for a variety of post-apocalyptic settings like Fallout, and have enough versatility to fit into Necromunda or 40k as general scum. THis model in fact was started in the 1990’s as part of my necromunda gang, though he didn’t get very far and all that was really done were the weapon swaps to 40k weapons from a Necormunda Weapons Pack, clothing basecoated black, skin base tone done and of course the flame-orange hair that I have eliminated all trace of. 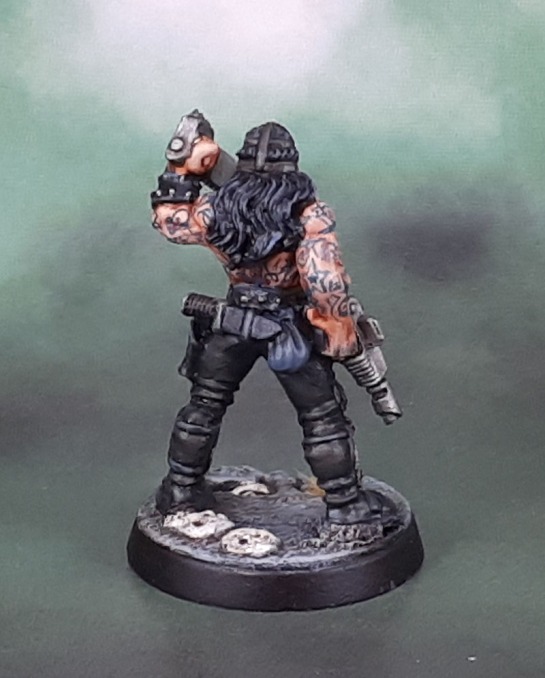 While there was no pressing reason to finish this figure, it’s one of the ones that The Tray allowed me to force a finish onto. And of course, all that base skin gave me a reasonable canvas to practice some mroe of my small-tattoo freehanding techniques with. I’m not sure if I got enough fleshtone into the mix this time, as they are rather dark, but blending them in to give that “under the skin” look is always a tricky aspect. This model was also an attempt to create two “sleeves” that were still made of somewhat distinct tattoos, rather than just, you know, washing the arms in black ink or something… 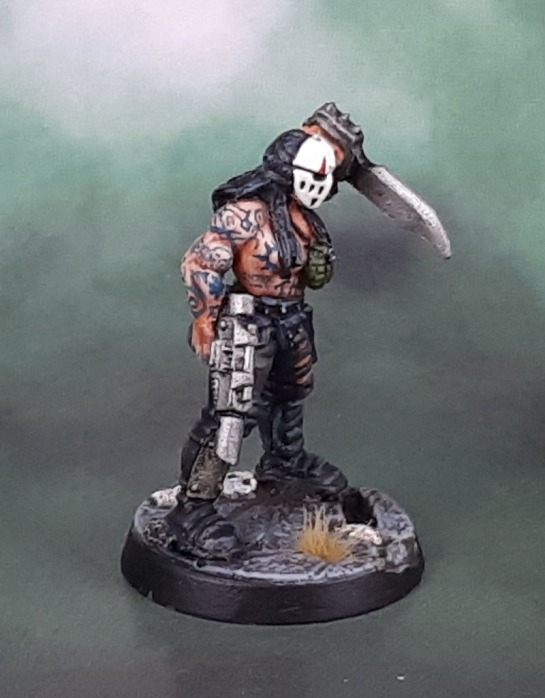 In the end, it feels a bit more like the “Henry Rollins” type of tatto sleeve that I’ve accomplished here rather than the “Randy Orton” look, but there will be plenty more models to keep practising on in the future, assuming I manage to survive our current worldwide pandemic. It was also an exercise in different black tones, with different looks atttempted for the leather pants, straps, boots, pouches and hair. I feel like they were more distinct before hitting him with the varnish, but whaddayagonnado?

Don’t forget to Jam That Jam!

Finally, some tattoo close-ups. On the stomach we have “Thug” (in case you couldn’t guess that part) and on underside of the left arm, we have “Jam That Jam”, which is a pretty obscure wrestling in-joke about Terry Bolleas’s script tattoo. 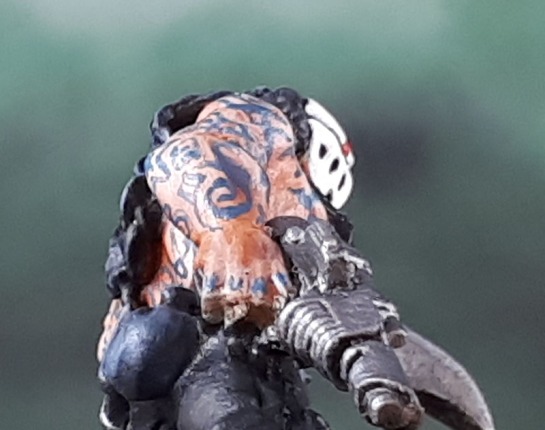 Placeholder text for my sore knuckles!

And to conclude, my smallest (semi) legible lettering yet. Knuckle tattoos on a 28mm model. I admit the lighting glade on the varnished model doesn’t help a lot, but can anyone actually read that?