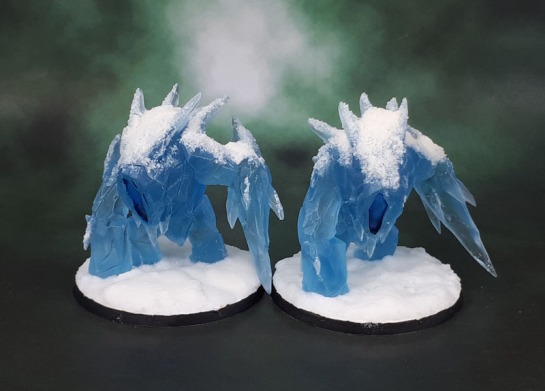 So here we are – my final set of submissions for Monster March ’19. Sure, technically, I didn’t finish adding snow flock to them to my satisfaction until a couple of days ago, slightly into April, but them’s the breaks. It certainly was the above challenge that got them out of their zip-lock baggies and into the form you see above and below, even if it went over by a couple of days.

The model itself is the Kickstarter-exclusive variant of the model, in clear blue resin. I’m not sure why Mantic doesn’t do them like this as standard, since it’s certainly a lovely looking model in this form (though their studio-painted model looks pretty amazing in its own right!) Paint-wise, I did very little. A careful edge-drybrush on the upper edges of Vallejo Ice Blue, followed by White. In the “eye”, I painted the Blue GW gemstone paint, with a touch of Army Painter Blue wash mixed carefully in, as well as a careful angle for the drying.

The rest of it was simply done with Woodland Scenics Snow Effects flock. White base, one layer of Snow Effects mixed in with PVA. The assembled model was then gel superglued down, and after drying, another, more generous layer of PVA/Snow Effects to sink the heavy feet in, along with a couple of footprints behind them both that you obviously can’t see in these photos of white-on-white-on-a-dark-background. Finally, I added some sprinkles of Snow Effects from above in a couple of layers, as my trial of doing so looked better than leaving them “clean”.

That’s (almost) it for Monster March ’19. I’ll have a compilation shot for this challenge tomorrow, with some other thoughts, but these are the final models for that challenge.