A little over a week ago, Westrider commented on the simple February community painting challenge I set up, and mentioned a thing called Squaduary. This is a “Paint a squad entirely during Feb” challenge. Now usually, I’m working on stuff started long before, but as I already had plans to work on my metal Plaguebearers, I decided “why not” and to attempt to see if I could get them painted entirely during February. For good measure I also got to work on some Wolves that had been sitting around for awhile.

Now, this has been (and will be) far from the only set of models I work on this month. There’s also my models for the Fembruary challenge, not to mention a few more Neglected Models, and you know – just random stuff I want to get completed – and and I’ve got plenty of other stuff to post up, so Squaduary updates will be pretty much whenever I get to them. I’m also not good with WIP updates, as there’s usually quite a lot of time between me taking a photo and then writing a post, and then even for the post to be published (since I have other stuff to post up- and right now I have both a queue and a backlog), so the images are often out of date before they go up. 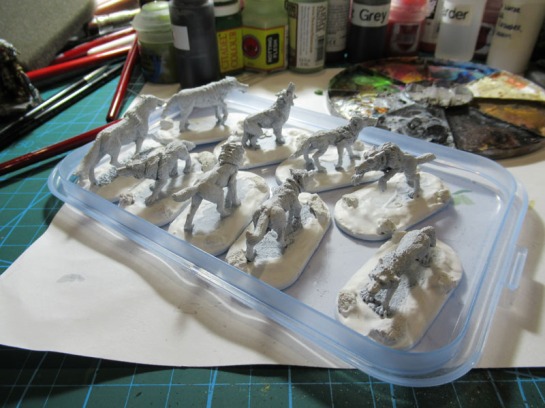 Thousandeyes also unfortunately uses Disqus for his blog comments. While it’s probably easier in some ways since there’s so many issues with WordPressers like myself posting on Blogspot’s blogs, I’m the kind of guy who usually reads up on new things before signing up, especially when the thing seems a little redundant to my needs, and there are only a few blogs I’d have commented on before that use it. What I read about it awhile ago didn’t endear me to it (and that was before the 2017 hack), so I won’t be signing up to it and therefore can’t post to the “official” squaduary stuff to “officially” sign up (and I’m not a twitterer. tweeter?) 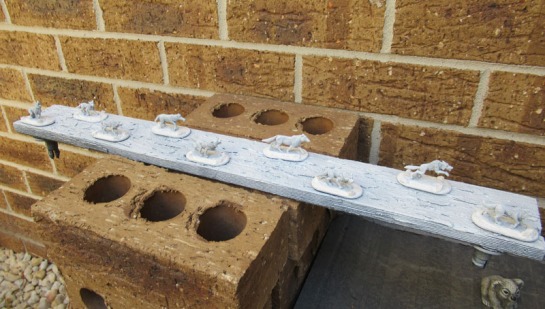 The Squaduary month is laid out in optional stages, which can be useful for a lot of people

There will be four stages, each taking a week, to this:
1. Assembly: 1st – 7th
Taking them off the sprues or putting them on bases, what ever way you get them ready for paint.
2. Basic painting: 8th – 14th
This is your basic coating and blocking in colours.
3. Clean up and details: 15th – 21st
Cleaning up your colours and picking out all the bits to make the mini stand out.
4. Basing: 22nd – 28th
Adding the base or just painting it out.
Stages 2 and 4 can be swapped as per your own style. Hell you could ignore the lot, I am not the Corpse God Emperor of you!

I’ve been following the final suggestion of ignoring the lot, Eric Cartman style.

Because that’s how I roll when I paint my toy soldiers. SRS BZNSS.

I’ve just gotten back from a 3-day work trip out in the sticks with patchy internet and almost no “me time” (like, midnight till I fall asleep after 2am before getting up again at 6:30am). I took a few of the Plaguebearers with me, and with luck, I’ll manage to get the “cream” batch of them completed this weekend. The trip away is also why I’m again SO far behind on other people’s blogs, and even responding to my own blog’s comments… 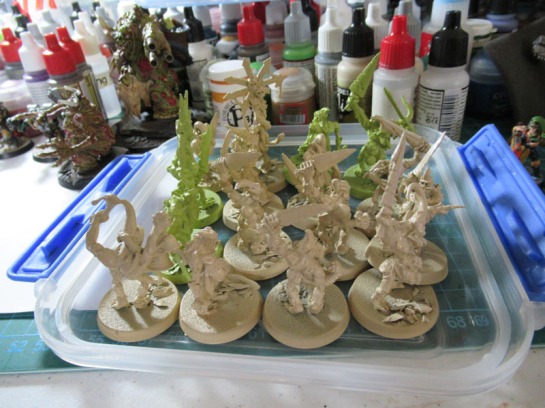 The total numbers are 27 Plaguebeaers and 9 wolves. The 27 Plaguebeaers will be merged with and then regrouped from the 14 I’ve already got painted, giving me 4 squads of 10 and a variety of flesh tones across the 4 squads. Or 2 squads of 20 plus a Herald, or… whatever. You get the idea. I’m just sorely disappointed that Chaos Lesser Daemons don’t come in their patron’s sacred number. (Multiples of) 7 in this case.

Once these metal plaguebearers are all done, I’ve got some resin Nurgle toys I want to get sorted out. I also need to search for those bloody metal Beasts. 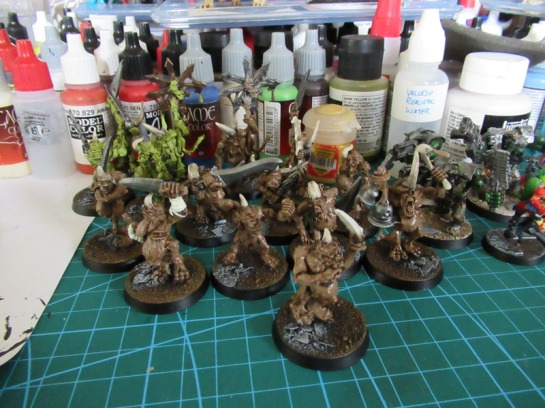 I’d have liked to post this up in some form earlier, but I’ve been flat out just getting all of January’s finished models photographed and posted up, along with the Decembuary Round-up. I especially wanted to post the round-up a few days after the end of the month. I participated in Dreadtober last year, and aside from barely getting a mention on their page because WordPress and Blogspot don’t play well together, they published the round-up at the very end of the month and the “latecomers” post like three days later. I finished the models on time (note: Plural), but didn’t have time to post or photograph my models as a wrap-up for a few extra days, so I missed out on inclusion and when I sent them a link to my final completed models it was ignored.

Aside from still being a little pissed off and bitter about that on a personal level, it also motivated me to not do the same thing, and give people a chance to finish painting their models for the challenge on the last day, and not feel obliged to run outside to photograph them and post on their blogs the very next day. So to close that tangent, I wanted to finish up on all of January’s posts before even starting on February’s. Hence my “Neglected Figure Challenge” figure that I actually finished on Feb 1st got published yesterday – on Feb 8th and this post about my participation in this February challenge coming now.

Still, giving it some time allowed for some actual progress photos, and Squaduary can’t hurt my motivation to get these Plaguebearers done. Further, any PBs or Wolves I don’t manage to complete this month will dovetail nicely with Squad: March! which will be the ABB hobby challenge following Neglected February. Since March’s challenge will only be concerned with finishing squads (or units) and not care when they were started, I can almost guarantee that these will all be done by then if I fail to get them all done during Squaduary.