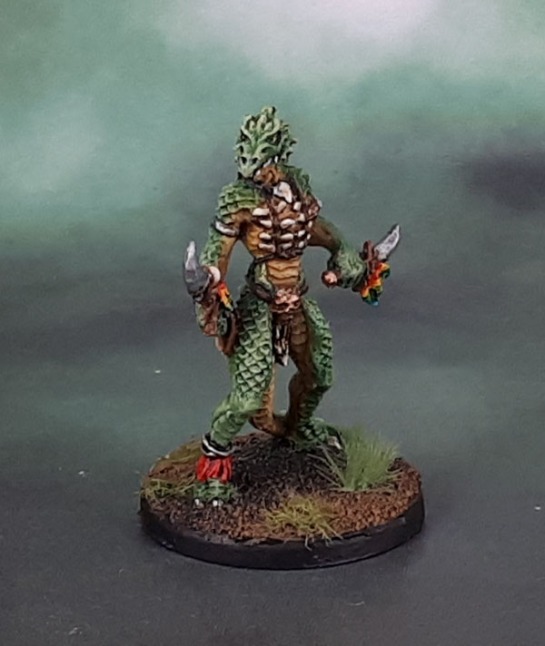 The final model in my little Reptilian trilogy for the itme being is another Reaper miniature. This time it’s the Lizardman Shaman who takes the proxy role of Heskan, the Dragonborn Wizard from the Wrath of Ashardalon D&D Boardgame. As with the other heroes, I pretty much immediately disregarded the minis that came in the box in favour of painted and/or better looking miniatures to use as proxies.

So this model is the pretty much the best option I was able to find on Reaper’s site back then. It’s another finely-detailed Julie Guthrie sculpt, and obviously doesn’t quite fit in with the whole “dude in a dress” stereotypical caster look, but I figured that the slightly feral Shaman look works just as well for a Lizardman. 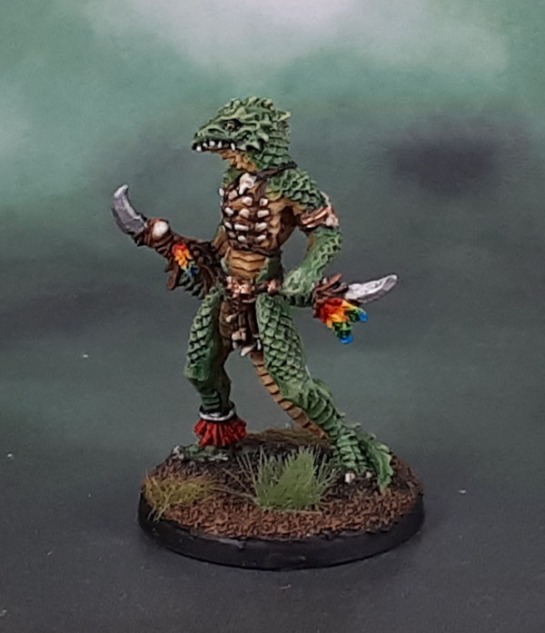 This one fits the Dragonborn template a little better, I guess – based on artwork I’ve browsed. He has a spikier head! It looks like – as with many things in fantasy and sci-fi gaming – that originally representations of Dragonborn were somewhat looser, and have codified over time into a more uniform look. For the paint I went with an unoriginal green with ochre underbelly look. I used colourful feathers on his dagger and staff as well as red ankle-tassels to add some interest, as the figure otherwise risked being quite plain looking.

And just to wrap up the last of my models from May, I’ve got a little group shot of the three reptile mans – all finally finished after so many years as neglected models!