These guys provide the final set of newly-shared figures (for now) of my Nurgle Lost & Damned force. With a bit of luck, I’ll be able to get a fair few more painted up before too long. 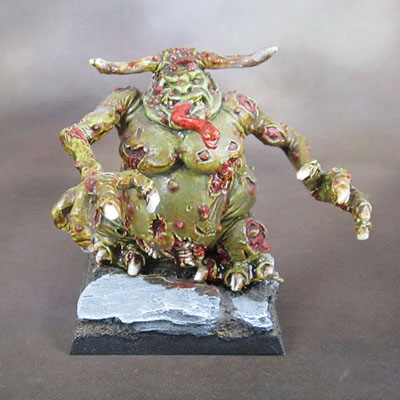 The Original Great Unclean One of Nurgle. 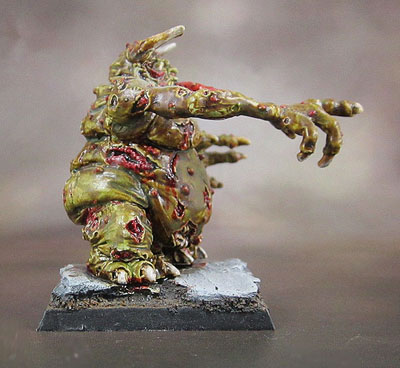 I want YOU! For Papa Nurgle.

I bought this figure back in the Realm of Chaos days, and started painting him not long after in the browny green olive tone above. Unfortunately, I stalled out for whatever reason and it took over a decade before I’d get back to him to finish off. I did so about 4-5 years ago now, and did so with a combination of The Dip and normal highlighting and shading. Basically, I wanted him to look properly disgusting, which seems to have worked decently well.

Nurgle’s Twerk! And some dripping behind him.

The nice thing about these models was the fact that you could essentially build your own unique Greater Daemon – as there were multiples of all of the main components, so you could really put together a series of unique models, and your Greater Daemon was unlikely to be identical to your friends’. Something replicated somewhat these days with the new plastics, but still not to the extent of old (without a bunch of kitbashing, anyway!) 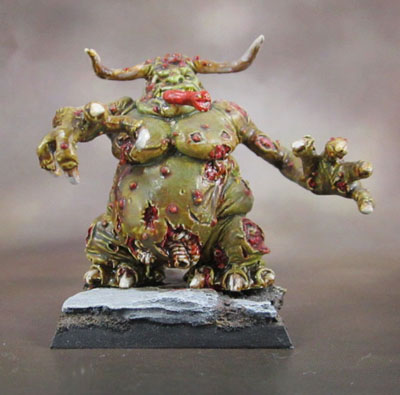 I might have another one of these somewhere with different components – I’m not 100% sure. I do have the later one that came out in the mid-90’s, though I have the early version with the horns and prehensile tail. I also have a FW one here as well, though neither are painted, and it’ll probably be at least a while before their numbers come up. 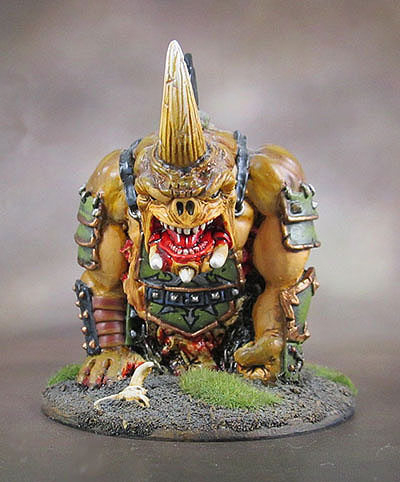 Chronopia’s Devout Tormented – As a Daemon Prince of Nurgle.

This big dude is probably unfamiliar to most readers. It’s a Devout Tormented from the Chronopia line of the mid-late 1990’s. Chronopia was essentially Heartbreaker’s take on Fantasy Skirmish following on from the Success of WarZone. Unfortunately, with the fall of Heartbreaker, both games fell. WarZone has had several resurrections over the years, but Chronopia has sunk into the dust, mostly forgotten.

I had this model sitting around for quite some time before I decided to use him as part of The Lost and The Damned. As is often the case, the idea behind him is for multiple use. He can play the part of a Chaos Spawn when needed, but also fill the role of a Daemon Prince of Nurgle. He’s a good size, and is much more of a unique model than the usual Daemon wearing Space Marine armour. I’ve got a couple of those to build one day as well, but it’s nice to have something very different as well.

Obviously the sculpt has some Nurgle-friendly elements. Being torn in half and still draging himself along the ground like a Zombie Crawler is one thing, and the large mono-horn ties in strongly with the Plaguebearers. As such, he can also fit in with my eventual “proper” 40k Daemon army, and in my Kings of War Abyssal (Daemon) Army (of Nurgle). The two will be mostly the same figures dual-purposed, as you do.

Shortly after painting the “Gym Cultists”, I painted this guy. I used a similar palette to tie him in with them, and used “The Dip” via brush on his exposed viscera and dismembered sections, to tie him in with the Great Unclean One. It hasn;t come out well in the photo above, but the back of the base shows a trail of blood and general disgustingness behind him. 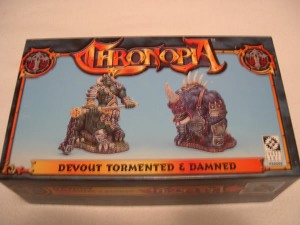 This is the boxed set he came from. Along with a very Dragon Ogre kind of model – the Damned. Both are mostly resin with metal detail accessories. Unfortunately, they’re the resin of the time, so don’t expect something like McVey or Mierce’s stuff here. The resin is “drop-cast”, like Scotia Grendel’s scenery and while the Tormented here is fine due to his design, but all of the space underneath the Damned’s torso is filled, and you’re kinda expected to paint it black etc and try not to notice it. I suspect that the resin components of this kit might have even been outsource-cast by Grendel.

A group shot with the Plague Marine Sergeant shown recently, to give a sense of scale for the two models. Not huge by today’s standards and more recent models, but they were both big for their time, and I think retain a lot of their presence simply by being cool models.

Nurgle Lost and the Damned – Army Shot! – Click to embiggen.

The whole army for the time being. It’s probably not a legal force, with a tiny points value with all of the zombies and cultists – and there’s obviously more to come, but this was the first time I ever managed to get the whole lot of them together on the table. So it’s nice. Marouda also took some photos at the time, so I’ll have to get hold of her photos and if they’re any good add one final update (for now) of close-ups of the force…