The entire, Complete, (for now) army. More shots at the end of the post. Completed Army pic 1/4.

Big post, this one. After completing first the trio of 28mm British 8th Army Valentine Tanks for for Dave Stone’s Season of Scenery Challenge painting challenge (that allows vehicles) followed by a trio of 15mm US Shermans, I decided to use my painting momentum to get the outstanding DAK Halftracks done, and then pushed on through some of the outstanding infantry, a couple more vehicles, more infantry, a couple of flavour pieces, and then a push through the final blocks of infantry and command. As I’ve been pretty well behind in my post, and these models are all part of the same force, I’m just going to drop them all in the one, large post and then be done with July at the actual end of July… 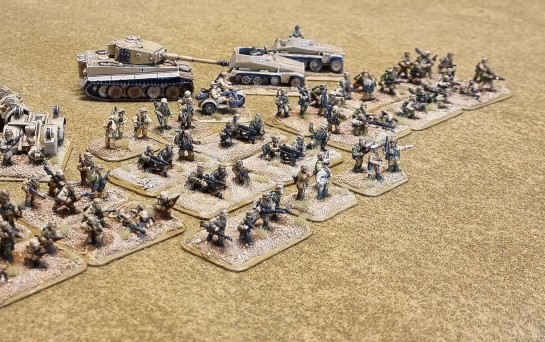 The army was built using the Grenadierkompanie army list in the original 1st Edition Flames of War Core Rulebook. I’ve got a few of the books from first, and a big pile of them from 2nd or 3rd, so I think given that level of investment, I’ll probably go with that ruleset for friendly games in the War Room. I’m pretty sure that FoW is good with grandfathering lists from previous editions and sourcebooks, so I should be able to use these in a modern game with someone else, should the opportunity present itself sometime. Anyway, I’ll take you through the models I finished this month…

The first pair of models I got back onto were this pair of Sd.Kfz.7 Half Tracks – purchased to go alongside as the haulers for my pair of Flakartillerie 88s I finally completed 2 years ago in 2019 as their transport option. Although I had started them, they were completly repainted, essentially using what was on there originally as a coloured prime coat.

Next up, I decided to keep the momentum going with some infantry bases. I planned to work on the 2nd Grenadier Platoon, but instead ended up with the Medium Machinegun Platoon on the desk, so that’s what got painted instead. They had already been based and had some of the basic uniform colours painted in, so it wasn’t a completely horrible experience, so I pressed on….

…and immediately painted the easy-win, single base model of this Antitank Rifle stand. They look pretty crap in this photo, but kinda cool in hand. I thought this would be a flattering angle…

The following pair of models were this pair of scout vehicles, still motivated by Dave’s challenge, I thought I might be able to get motivated enough to also get these two done as well – a Sd.Kfz.250/1 light half track and a Sd.Kfz.253 recon vehicle. I can’t actually recall why I bought these – I do remember that I got them after the rest of the army. I know that the 253 is an artillery spotter, so it might have been to go alongside the pair of StuG III Gs rather than the 88s as my understanding is that they were rewed by artillerymen rather than actual tank crews from the Panzer Divisions. 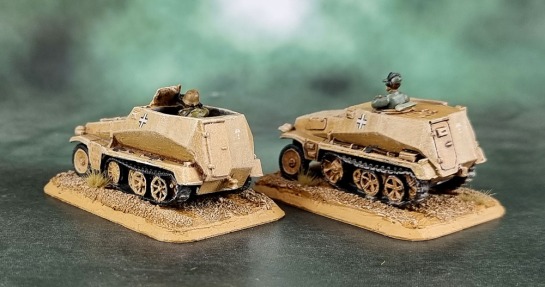 These had been painted in dunkengelb, with a flesh wash over the top. I had to go over most of that since the look of it didn’t appeal in 2021, but it did still work as a basic basecoat to go over. The 250/1’s gunner was a mess, since I couldn’t figure out which model I was supposed to use, where the original gun or gunshield were, and so forth. Going with my recent “just get it done” ethos to these models, I just clipped the gunner off at the knees so he’d fit, and luckily found a gunshield of a vaguely correct size, drilled a hole through the lead and poked his MG through it. Glued my new correctly-heighted amputee into the crew compartment and painted it up. Good enough!

A pair of previously-painted StuG IIIs, sharing a pic with the Sd.Kfz.253.

Apparently the StuG IIIs have not been shown here on the blog before, so here they are as a bonus image, though they’re not being included in the month’s tally since they were completed some years ago now. Looking at them here, I think they might actually need to go back into the queue for a repaint. While they’re not terrible, they’re a lot lighter and …rougher looking than the rest of the vehicles in the force. It shouldn’t take much to get them back shipshape. 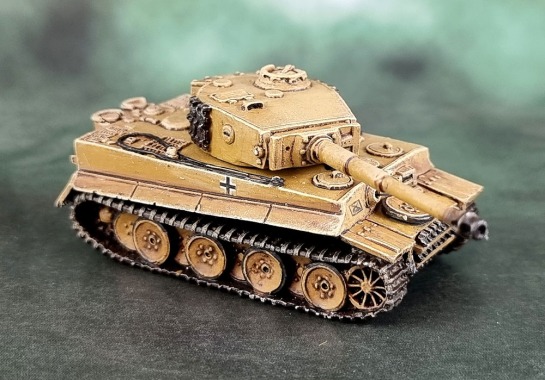 On a very related note, I did some cleanup on this Tiger I as well. I know it’s not the proper version for the Desert War, as it lacks the dust filters on the engine, but given it was purchased during the early days of Flames of War, I was limited to what was available – both in terms of the official range and also in terms of what my FLGS at the time had in stock. So, as I’ve heard recently – good enough for Government work! – and another pick for Dave’s challenge. 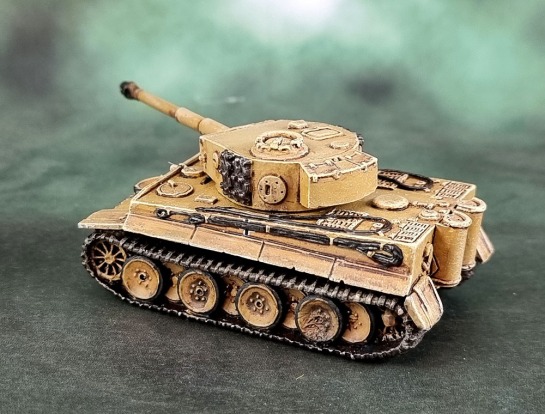 I didn’t use it in every game, but with my overall force being a little on the softer side, due to being mostly infantry – it was nice to have the option to bring out something as fearsome as a Tiger. I guess I could swap it out for the proper version without much hassle these days and repuspose this model for Europe, but I’ll leave that as an option for down the line when I have far more painted 15mm armour.

After getting all these done, I got stuck into my second Grenadier Platoon – having completed painting the first one 2 years ago, back in June 2019, which, like the Machinegunners had been based and had some of the basic uniform colours painted in (about 40%?) and some other details such as boots. Getting these done was a much more of a slog, and my enthusiasm for painting 15mm Germans had pretty much completely waned at this point. 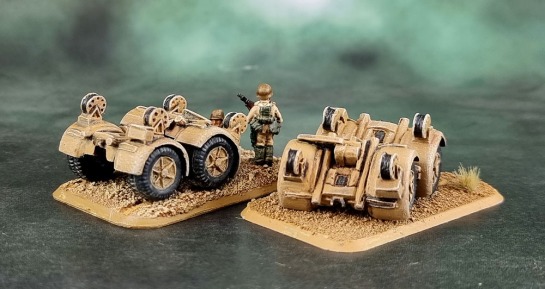 At this point I could see that actually finishing this army was both achievable and in sight, though it was clearly going to be painfully tedious to get through. With this in mind, it was time to pivot again to the wheel bogies that came as part of the metal 88 Flak kits. My plan was always to turn them into little mini-dio-scenery-bits to place next to the actual guns. Simply because I had them anyway, and so why not use them to make a couple of little bases that make the whole thing look a little cooler?

The completed Luftwaffe contingent. Though after taking these photos, they may also have one of the Kübelwagen. I can’t remember the minutia of the original list.

So I finally made them up. The wheels were already basecoated in dunkelgelb again, and I’d based the two Luftwaffe crew, so I needed to finish them – though 2 minis was not that painful to do.

Now it was time for the worst part of the entire project. The third grenadier platoon. Based, but not painted at all. Just primed white. Painting these 30 little mans in the same mish-mash of worn, borrowed and stolen campaign uniforms was just fucking horrible, espoecially given how over painting these infantry I already was at this point. They took me over a week just to get these six bases done. Not fun, and only something I was able to make myself do since I was well aware that they (pretty much) completed the army.

Except, they didn’t quite. Some Command stands were next, including the Company Commander and the 2IC, as well as a couple of others. The 88’s Luftwaffe Command stand needed a bit of touching up, and there’s a final command stand I can’t remember. Perhaps a Leutnant stand for the Grenadierkompanie? I’ll have to check. It’s also possible I built one too many unit leader stands back in the day, but whatever… 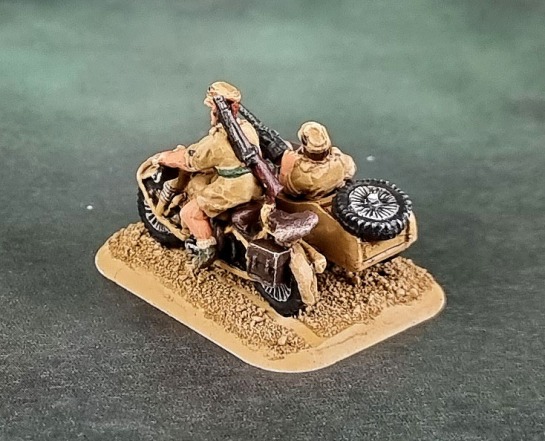 With those all done, it just left one final model – this Motorcycle Sidecar that is part of the Command unit. Like a lot of the models, it was built and partly basecoated, though the rider had to be located, cleaned up, primed and then painted entirely. And then it was done. It meaning both the sidecar as well as the actual entire army!

Then all I needed to do was sit down for an age and type out this post, and I still need to go outside and photograph all of these little models. Then photoedit them, upload, caption, tag, edit and finish off the post, and write a conclusion…

Of course, an army is never completely completed, as we wargamers all know. Looking forward, I’m now going to repaint those StuGs, and at some stage I’ll likely add a Zug of Panzer IIIs with perhaps a single IV to go with them. To make the army legal for post-rulebook versions of the list, I’ll have to get some trucks for the infantry, unless I change the entire force to a Panzergrenadier one and get a bunch of halftracks instead.

Sadly, while I’ve been looking, I’ve been unable to locate models of the Sd.Kfz.251/1 Ausf A or B so I can have the correct version for the time period, with only the later versions being even vaguely readily available. I’m also not John from Just Needs Varnish who can just magically MacGyver commercial-quality WWII wargames models out of bits of plastic and cardboard and toenail clippings, so I can either put the idea onto the backburner for later or just buy a box of Ausf Ds and hope nobody notices and/or cares.

Anyway, an army is finished. Not something that happens every day, and even though it’s made of teeny-tiny army mans, I’m pretty chuffed about it – and a big thanks to Dave for running this month’s challenge, as well as to all the others who run similar mini painting challenges. Extra painting motivation is great, it can often get stuff that wouldn’t normally be touched onto the painting table and out of the backlog – and occasionally, as in this month – has a surprisingly positive result!