Here’s the next bit of scenery on the Battlefield in a Box review train – Automotive Garages, this time under the Team Yankee (now World War III) banner – they should really have a better, more unique name for the rebranding of TY than “World War III”….

Once again inside the retail box, we have a blister tray. It’s just occured to me that these smaller trays are the same as the ones found in many of Battlefront’s Resin/Metal FoW vehicle sets. 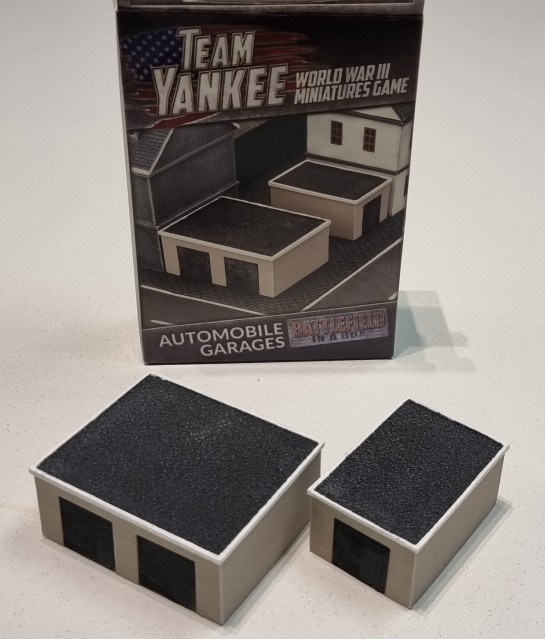 Once again, I’ve just thrown them alongside a couple of buildings so you can see how they look. I’ve also got House Extensions butted up against the buildings in these pics, so we can see the full effect. I didn’t take a pic, but you can place a small infantry base on the single garage, and a medium base on top of the larger garage.

Similarly to the house extensions, the smaller of the two garages fits inside a standard FoW European building.

The larger garage, on the other hand is just a bit too big. I’ll share my solution to this problem with a later review. In the meantime, you can see how I choose to store the regular buildings. Sistema tubs to the rescue!

As always, I purchased this set from a retailer with my own moneys and have no incentive to say anything good, bad or ugly about it. These garages are about as basic as things get, in a lot of ways similar to the desert terrain that was a lot simpler than the European buildings I’ve been sharing here in the more recent posts. This set has a lot less positive going for it compared to many of the others – the fact that it’s “open box and place” is about it for the positives, I guess it looks alright as well. The negatives are the cost (not expensive, but not cheap either!) and the fact that something this simple really veers hard into something that would be reeeeally simple to build yourself with some foam core (or just card!), PVA and an hour or so to do it carefully.

And now I have a question for YOU, dear reader. Obviously these will work in any game set from the 1950’s through to the modern day, but did garages of this type exist in any in the Europe of the early-mid 1940’s, and if so were they common enough to “fit in” on one of our standard semi-rural wargame tables?