I still haven’t had the chance to take any new photos, so instead of leaving the blog quiet again this week I decided to drop another review of two more of the many, many almost-identical-but-ever-so-slightly-different houses from Battlefield in a Box’s prepainted range of European houses. Today, we have the Antwerp House and Dresden House. We can see by the SKU numbers that this pair fits right in between the two I reviewed the other day, while the packaging on the Antwerp one is different. I believe that the Green box with the specific Flames of War branding is the older style as I have a few older non-scenic FoW kits with the same art style. If you read the previous review of these buildings or if you’re a regular reader of this blog, you’ll find that 90% of the text in this review is identical or near-identical to that one – that’s because these reviews are also very much for people who are looking for information on these sets, as when I was looking into them myself a few months ago there was very little actually out there and almost nothing in terms of images on what to expect – also why I’m keeping these to two kits per review as it’s easier to google. 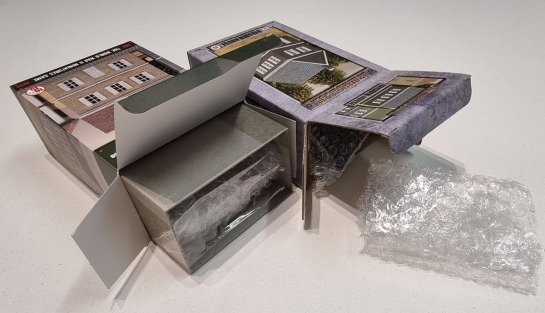 Opening the boxes, we see that the actual resin buildings are wrapped in bubble wrap while there’s a square of cardboard that serves to reinforce the thin printed card of the outer “retail” box. 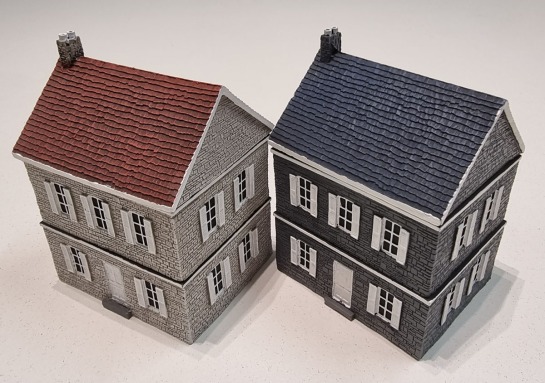 Once again, I decided to review this pair of them together for a very specific reason. That reason being that the buildings are from the same mould – and in this case the roof sections are the same as well – the only difference at all in this pair is the paintwork. 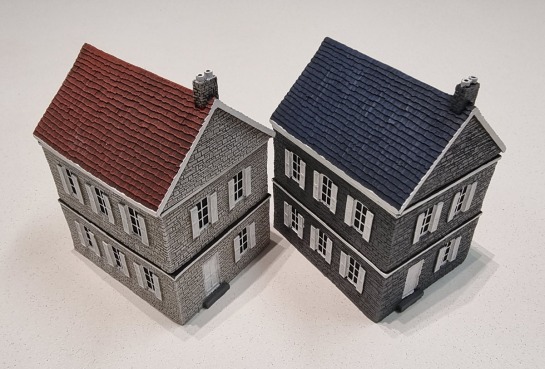 Yep. Front and back, they’re identical. Having said that, they are both fine in terms of being prepainted buildings that you just buy and then plonk down on the tabletop, ready to go – even in their identical-ness.

The interiors are what I’ve come to expect from Battlefront at this stage – simply painted floors with entirely black walls without doors or windows picked out in any way. I’ll eventually get to repainting the interiors of these and weathering the outside, but that hasn’t been any kind of priority and as such – it’s something I’ll get around to doing when I get to it. As you can also see, each level fits two standard infantry bases inside.

As always, I purchased these sets from a retailer with my own moneys and have no incentive to say anything good, bad or ugly about them. The painting on these is fine. It’s fit for purpose and as always, the biggest benefit of these is “Open box, put on table. Done!” In that, I really see zero problems. Adding a little weathering/drybrushing will really make a difference on these, which I will do at some stage. These double-storey buildings are a bit pricier than a lot of the others I’ve reviewed to date. If you have access to a 3D printer and have the time to spend printing and painting, you may want to instead go down that route instead, because buying a bunch of these to make a town will get pretty pricey pretty quickly, and there really isn’t a lot of difference between these two. They work for me, but as an objective review I have to give these a square thumbs in the middle, mostly due to their price.

If you want something that you can just unbox and drop straight onto the table, though – these still do very much have their place. While I feel like I’m no slouch when it comes to getting a decent number of models painted to a decent standard, I’ve also got a lot of models to paint, and these allow me to drop and play. I’ll likely repaint them when I have time, and even supplement them with some of the aforementioned 3d printed buildings in time, but as someone who started 15mm recently without any existing buildings in this scale, I’m ok with having purchased these. As pretty generic European-styled buildings, I’ll also be able to easily use them in different time periods aside from WWII, such as the more modern Team Yankee/WWIII setting for example.