Another quick and easy post today – On a little bit of scenery from Reaper Bones’ 1st Kickstarter. It’s a nice enough piece, sculpted by Bob Ridolfi, though I think the name “Well of Chaos” is a little overblown for what it actually is.

It’s a little bigger than your standard 28mm figure (sorry, I forgot to get a scale shot!) I decided to KISS and keep the scheme nice and simple. Grey stone with a touch of dirtiness to it. Faded, aged bronze for the accoutrements, and a few layers of Vallejo’s Realistic Water for the, well, well water. The water looks a little weaksauce in these photos, but it looks fine in hand. I wanted to keep it to just clear water rather than getting funky by making it red or green or whatever. 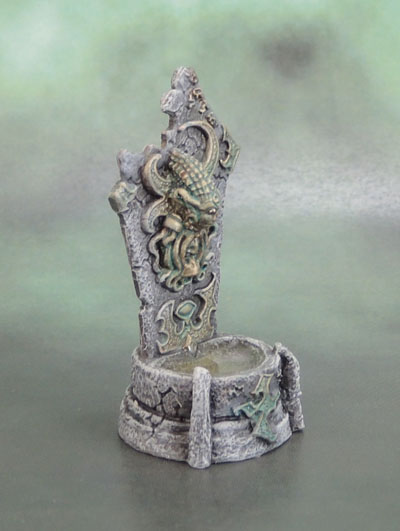 I’ve probably got a few more random-ish bits of scatter terrain around from Bones 1 where I went all-in. I know they did some more in Bones 2 and 3, though I was much more conservative in my pledges for both of those. In a year or so, I’ll have a ton more of this sort of thing from the recent Mantic Terrain Crate Kickstarter, which I backed despite my misgivings around Mantic these days. I backed it with the knowledge that it’ll probably be 6 months to a year late, shipped in unintentional waves, and also mismanaged in some hilariously clownshoes manner. So forewarned is forearmed, I guess? As for this thing, it’s a decent piece of dungeon furniture, costs like three bucks, and does what it says on the tin. Can’t go wrong!