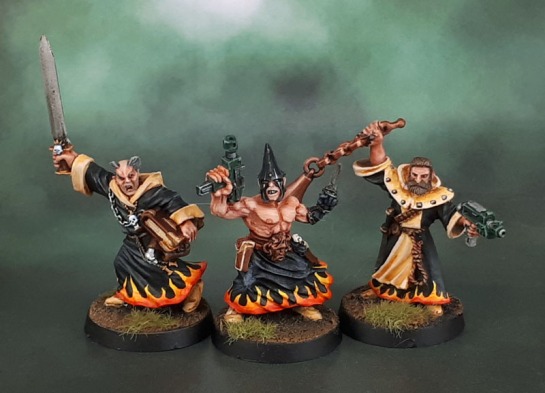 This trio of models was completed in February, after a long, long time in the making. So long, in fact that I don’t precisely recall when they were started, though I do know that they were all started independently of one another, and it was only over the years that the three became a trio of models that I stored and considered together.

The first one of these models, on our left with the sword – is the second of my “proper” Preachers that I painted from the line that came out with the 2nd Edition Sisters of Battle Codex. The first was done years ago now, but I’m not sure where the model is, though improbably, the other model is still available new from GW. Possibly with some of my Imperial Guard, or more likely in one of the two missing figures cases that house a lot of my Blood Bowl and Necromunda figures. I’ll take some pics and post him up when I find him. This guy is the one that we’d always joke around and refer to as “Keith from The Prodigy”, because of his hairstyle. A bit grim in a way for me to have just finished him and have been listening a little to The Prodigy recently. 😦 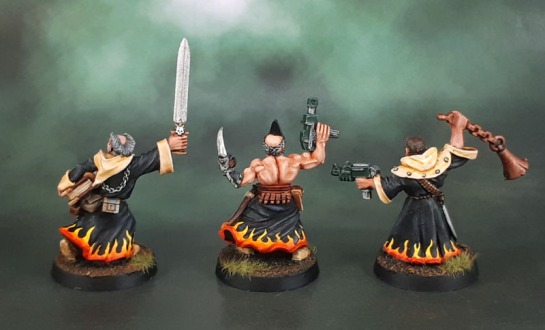 The second of these models – the shirtless fellow in the middle – is from the small range of metal Chaos Cultists released during 3rd Edition 40k in 1999. There were two Demagogues and six Cultists. I have a couple more of these, but I’m not sure if I got all of them. This guy is “Chaos Cultist 6”, but I felt like he wasn’t exceptionally Chaos-y, and with an appropriate paint job would fit in with the wider group of Redemptionists, who I had painted in similar schemes, along with my Preachers and even my WHFB Flagellants. This was to create a consistent visual theme between the models where you could see that the Redemptionists and even my Cawdor, who could sub for Ministorum Troops, PDF or Imperial Guard – as well as Necromunda Gangers (and, obviously, cultists of almost whatever was needed). This of course, is where the divergent styles of basing that I’m doing now in the twenty-teens creates a potential problem. 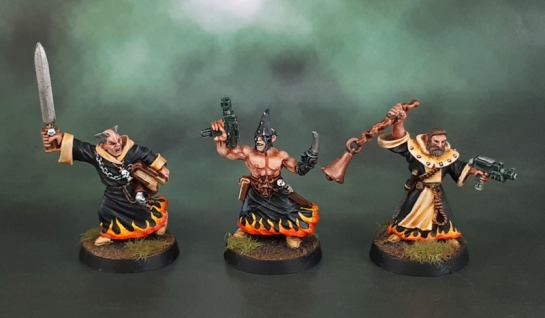 The third of these preachers was originally a Necromunda Redemptionist model, specifically – Brethren with Stub Gun and Autopistol. As you can see, the Stub Gun was removed and replaced with a bell on a chain (from the plastic WHFB Zombie kit) and a bearded head from one of the Empire kits. Probably the kit that came packed in with Mordheim.

So that’s it. Though I am pretty pleased to have finally completed this trio of models that sat, part-finished and thoroughly Neglected for well over a decade and more!