Earlier this month, on the heels of having finished the shipping crates I just showed, I remembered a plastic toolbox-container-thing shoved out of the way behind a door that had a whole lot of resin terrain from the 1990’s in it. Unpainted terrain, in case that wasn;t obvious from who’s blog you’re reading. So I grabbed it out and selected a bunch of pieces to smash out. And then did just that over a few days. First up is this trio of sci-fi crates, designed with all of the forethought that a lot of 80’s and 90’s sci-fi had. In this case, no realistic way to stack them for transport without smashing the stuff on top. They’re still available from Scotia Grendel today, though these days they come with a trio of smaller crates. I don’t recall ever seeing the smaller ones, nor do I recall what these ones came with. They might have been a two-or three-pack? Dunno. Though one of them (the grey one) is pretty badly cast. Maybe that’s why I never bothered to paint them back in the day? NFI to be honest. When it came to painting them, rather than the more logical step of painting them all identically, I instead chose three different colours, with the thought of perhaps using them as objective markers, and in that sort of situation, “the red one” is more useful from a gameplay perspective than even numbering the three identical pieces. I gave them a bit of weathering as well to round them off. 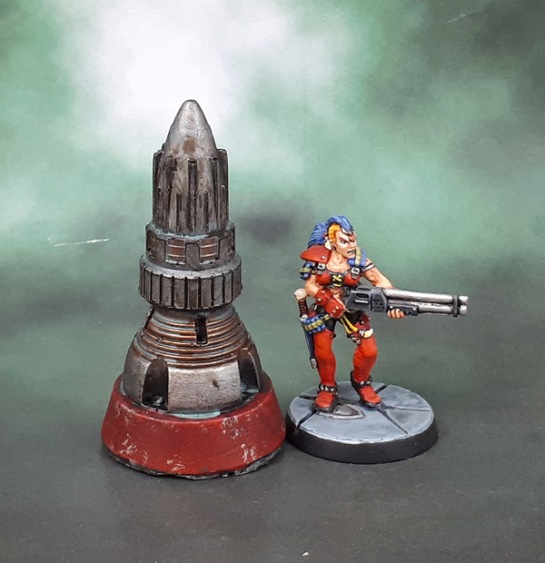 The second piece is one that onbiously goes alongside the other mystery resin piece I painted recently as they share the same design cues and elements. This one is obviously much smaller, and I didn’t bother with a cracked paint effect or anything major, preferring instead to get the thing painted and done as quickly as possible.