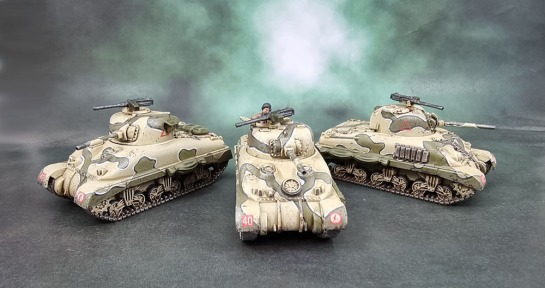 Well, at least September’s models were quick to get through – and now we’re doing October. So with a table-functional set of Panzers for my DAK force set up, my choices when planning to add those Panzers was to paint those models, then shove the whole lot back into a figure case and forget about them again for several years, or spend the time to build up an opposing force for the Afrika Korps to battle. As you can see, I went with the latter. The tanks I started with were two platoons (well, A Company HQ and one platoon) of the ubiquitous Sherman tanks that saw extensive use across many updates and variants with the Allies throughout the second half of the war.

I did a bit of a look around for how to paint these. As I’ve written before, as much as I like the look, going for a plain desert sand colour for my 8th Army force(s) isn’t the best option for models that will be facing off against a broadly similarly toned opposition with the Gelbbraun/Desert Yellow German forces. 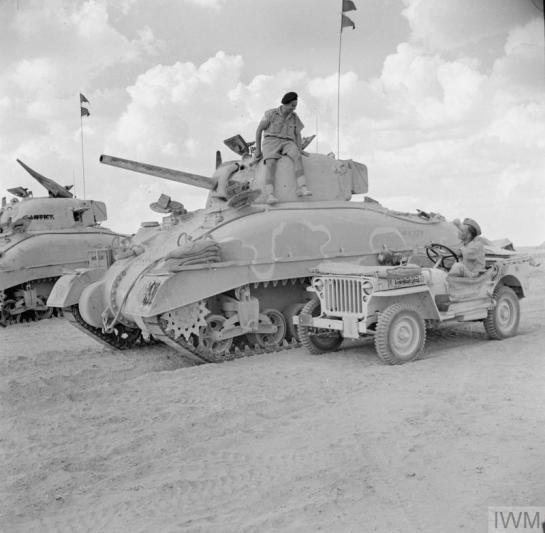 After quite a bit of looking at options and really being surprised at just how many different and varied camouflage schemes were used in The Desert War amongst different units and forces within the British and Commonwealth forces, I decided that I liked the look of this particular four-colour scheme. I wasn’t expecting how unpleasant the two-colour “lining” would be to actually paint over the course of a half-dozen tanks!

I thought it worth showing the different angles of the camouflage on the Shermans, including the overhead view.

Even though I’ve completed this batch of Shermans, I’ve now started building a third platoon to add on to these as opposed to my original plan of filling out the second platoon with a different type of tank. I now just need to complete adding the stowage and then I’ll be able to spray, and then start actually painting. So hopefully they’ll get painted in November?

To finish – here’s the HQ and 1st platoon together – my first batch of completed British 8th Army forces. More to come! 😀