I try to avoid pimping Kickstarters on my blog, but I’ll make a rare exception for this one. I stumbled onto this one about a week or so ago (translation: I can’t remember how I found it) It might have been while browsing the three Kislev teams that are all running at once that the “you might be interested in this” thing they have on KS. Anyway, there’s an endless stream of small producer, self-published small sets of figures campaigns running all the bloody time. There are also a lot of “Sexy ladies of not-40k type campaigns” – again, which I’m almost universally happy to ignore, but this one stood out to me.

Sorry, the render pic is one giant image.

Anyway, what stood out to me on this campaign is the …well, not a total absence of battle bikinis, but the fact that the models have a nice variety to them. There are different body types represented, there are quite a few figures with “that’s clearly armour” covering their décolletage, and a few that through the clever positioning of collars could easily be painted as clothing, armour or bare skin, depending on your personal inclination. I like that. We’re not talking Wargame Exclusive here. 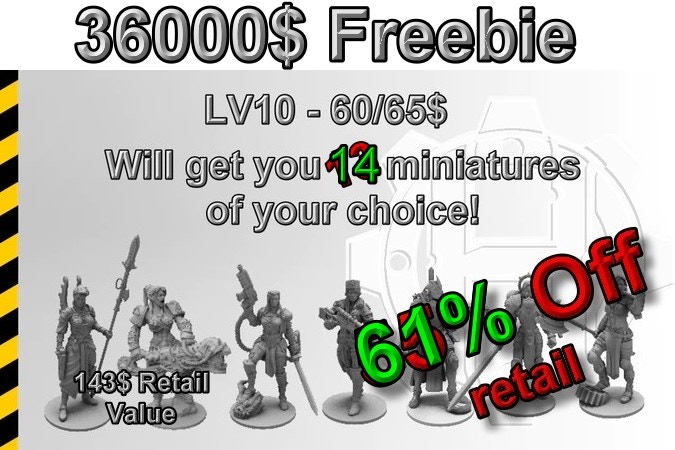 The campaign is also offering pretty good value at present, with the sweet spot being pretty cheap for 14 models, and the fact that you can choose the models you like. Which means you can skip any that you don’t like for whatever reason. I’ll be skipping the flying guns-akimbo Commissar because the post looks stupid to me, but probably picking up the rest. The creator is also offering to allow the purchase of the STL files for personal use, which is an interesting twist on things.

There are also quite a few stretch goal models unlocked, and frankly, I like the idea of being able to easily run things like some female assassins from temples not called Callidus.

Hopefully it’s obvious, but I feel that I should point out that I have no affiliation with the creators, I don’t know them nor have they offered me anything to mention them here. I’m mentioning them here because I like the look of the models, and Heresy Lab seems like they can use any exposure they can get as they’re clearly not as well known as other up-and-comers like Bad Squiddo (who hardly needs me to mention her!) I’m down for a buck at the moment, and will most go in for a Level 10 on payday, probably 2x Level 10 via the PM so I can get 1 each of the models I like with a couple of dupes and a big maybe on the STL files. I don’t actually have a 3d printer, but I’m sure I will one day. I’m going to see how information on shipping, etc pans out before I go all-in, though.

It’s also worth pointing out that the campaign page says it will be delivering in May. That’s clearly some kind of dream as you’ll appreciate if you have any experience with Kickstarter. A safer expectation is to hope that it delivers before Christmas. I’m not even being mean or sarcastic there in the slightest. Just realistic.

Anyway, if these seem interesting, check out the campaign. It concludes in just over 84 hours.