I don’t often pimp Kickstarters on this blog, but I’m happy to make an exception for this one. It’s RPE’s (Ral Partha Europe) s̶e̶c̶o̶n̶d̶ third Kickstarter, and like the first one, they’re keeping the scope quite small. A 14-day campaign with a £1,000 goal, with £775 pledged so far at the time of my writing, so success is pretty much a given at this stage. 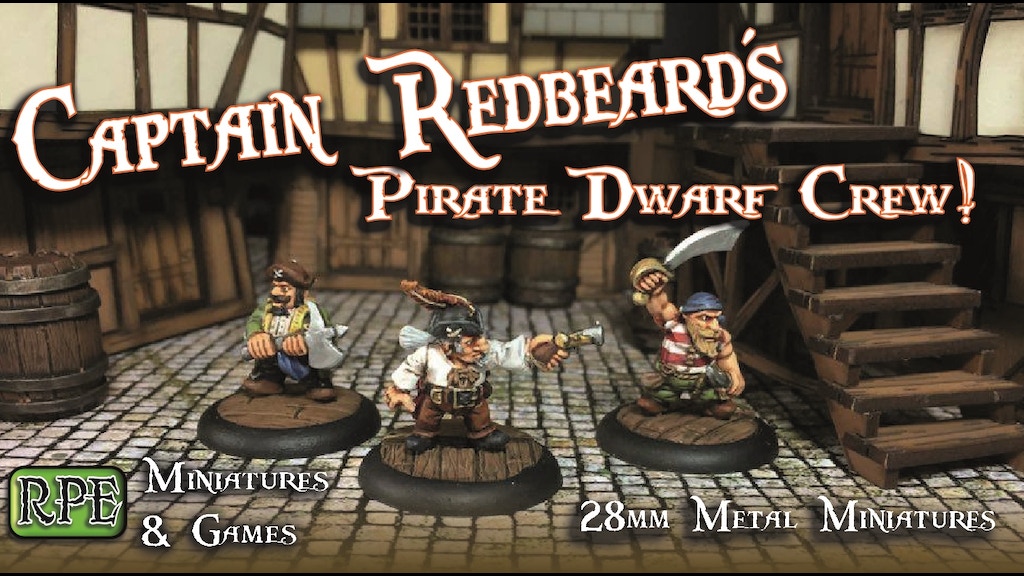 It’s a crew of pirate dwarves which fits perfectly well into a little project I’ve got lined up for the future. 9 models so far, with freebie stretch goals at £2,000 and £3,000, and (possibly) more if it gets higher. Delivery is set for August this year, so a plan for (roughly) a 4-month turnaround from completion to delivery.

I personally had a good experience with their previous campaign, the Dwarf Veteran Warband, with it delivering on time(!) and producing quality models – the sculpts being a nice throwback to the characterful “Oldhammer” Citadel style of the late 1980’s and early 1990’s and that of the satellite companies where ex-GW sculptors like Kev Adams and Tim Prow ended up.

Having said that, delivery was a little rougher for some others who backed as they had it set up for a la carte additions and such which they have said complicated matters on their end. To stop that from happening again, they’re making each pledge reward a set group of models – 1 of each without add-ons and duplicates and so forth.

So if piratical dwarves seems like the sort of thing that floats your boat, go and have a look at the Kickstarter campaign.

Tomorrow: Back to painted miniatures!