Following on from my recent post with the sets of “Kazumi” stairs from the Archon Ramparts Kickstarter, today I have the “Eternal Cathedral” themed stairs. You can read all my hurfblurf about the Kickstarter on that post if you’re so inclined. The important thing here is that I finally got these things completed. I initially experimented with Contrast Paints on these in an attempt to get them done quickly, but …it didn’t work. It looked – as we say here in Australia – shithouse. 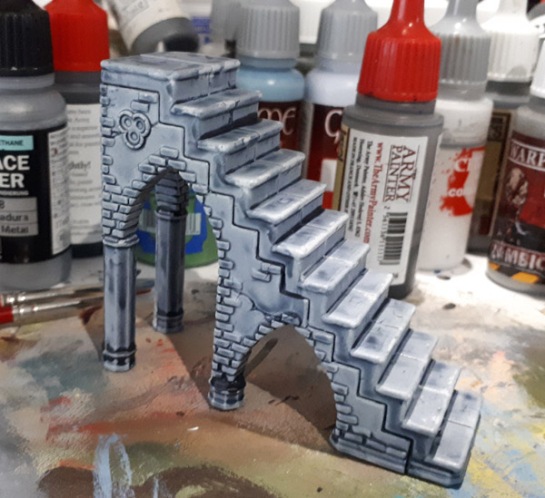 That’s why experiments are a thing, though – so with that, it was the more annoying than upsetting task to get around to re-priming the fucking things and doing the drybrush/wash/weathering powder thing. I did originally envision a lighter grey stone, which is why I did the Contrast thing, but in the end, more mid-grey is fine. The original plan was to get both sets finished in the same month and post them up together, but it didn’t quite work out that way. At least I got them done in the same calendar year!