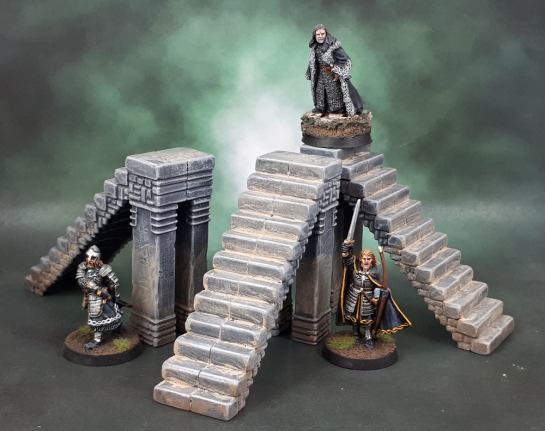 Archon Studios don’t really have the greatest rep. Essentially a renaming/legal rebranding of Prodos, architects of one of the recent WarZone revamps as well as the fulfilment and licencing abortion that was AVP with some backers apparently just never getting their stuff. So when they rebranded and came up with a terrain KS in hard plastic that looked just too good to be true, I assumed it was, and went with “fuck those guys” and ignored it. Fast forward some length of time and they actually fulfilled that KS with quality product and then started a second one. I still skipped it. But then people started getting their “ship existing product early” stuff while the Late Pledge manager was still an option.. so I gingerly went ahead and added some stuff to my cart, and asked them to “ship existing product early“. And whaddaya know? Just as COVID was starting to hit the world, my parcel went out and a few weeks later was safely here.

And like I said, COVID hit. And so I never got around to even opening the parcels. Until a few days ago. I still haven’t opened the stuff I got from Vic Minis around her bushfire relief offer (and then some more shortly after that to support Vic more directly).

I found in amongst all of the really actually very nice stuff, these staircases. So I got to work on painting and weathering them quickly. There were also a bunch of other cool little scatter pieces like statues and stuff from the first campaign but I didn’t get any of those finished in time for the end of August. But I did get these finished. So here they are. Done not in the South American style of this scenery’s theme, but as pretty bog-standard stone/dungeon style, which is why I picked up these particular add-on-extra sprues. Suitable for historical through fantasy through modern through apoc and even 40k-ish sci-fi. Including any places with Minas in their names, as illustrated by today’s models.