So Dreadtober is a thing that has been around some of the 40k Blogs for a few years. Well, this is the third one, and a couple of the blogs I follow have mentioned it recently as they worked through Spartember, so I did some looking up to see how it works and if I can play as well. I found the online home of “Dreadtober 2017” (though I assume it’ll also serve the same purpose next year and so on) and contacted them to find out if finally getting stuff finished fit their criteria for participation, since I have a pair of Dreads that have been unfinished since 3rd Edition and 4th/5th. And now that the dumpster fire of 6th/7th edition 40k has been taken out behind the shed and put out our misery, there’s a reason to get back onto my 40k collection again – including this pair of Albatrosses.

The green-and-white dread was built as part of my fresh-start-for-3rd ed marine army. A lot is done, but it still very much needs highlighting, shading and work on the details and suchlike.

The Iron Warriors Forge World Dread was purchased second-hand about 10 or so years ago now (whenever it was that 4th was transitioning into 5th), and was painted pretty much as you see it now – reasonable tabletop quality but not up to scratch for what I want. I’ve rebased it and built/added the left arm with the drill-powerfist, as the original was a very roughly scratchbuilt thunder hammer. I’ve also magnetised both arms. (and plan to add a Plasma Cannon option.)

For good measure, I also asked if Be’Lakor would qualify, as they have people doing Daemons and such as well. I started him as a stretch goal for 2015’s Painting December project, and never finished him. So, you know. Motivation. 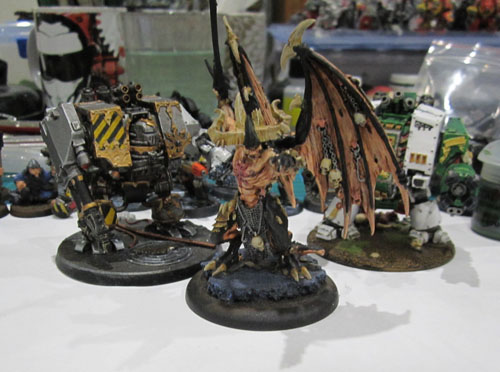 Anyway, the reply I got was in the affirmative so I now have a bit more motivation to get these suckers done. I’m waiting on some 3D-printed Icons for the green-and-white dread that will be integral to completing it beyond the touch-ups and completion of various bit that the model sorely needs. I may decide to rebase it as well. I’m not sure.

Not sure if I’ll do a theme for November, but I do plan to resurrect “Painting December” this year, though. I might even see if anyone else wants to get on board, but that’s a post for later!