As a finale to the previous two sets of Zombicide Abominations, I’ve finally finished my “normal” set of them. I may be missing one of them, actually. I’m definitely missing a Berserker Fattie. But as it stands, these are the last of my Abominations for the modern versions of Zombicide, finally painted (until 2nd Edition arrives!) 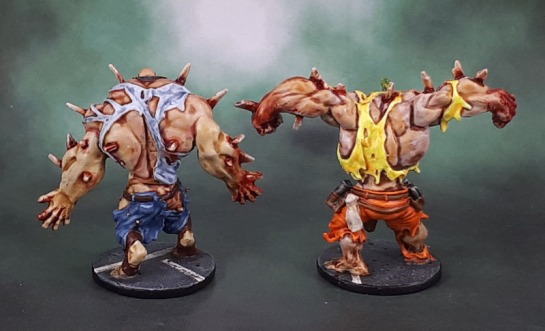 The “tourist” sculpt (see the camera?) seems to be the one I’m missing an extra model of, though it shouldn’t be an issue in most normal games – where four A-Bombs will be way more than enough. The other sculpt seems to indicate that he used to be a tradie (or a tradesman) with the tool belt, rag, drill and safety goggles. With that in mind, I tried to use approriate colours for them and gave a couple of them flouros. I also gave these “vanilla” Abominations white street lines on their bases as opposed to the yellow on the exotic ones, just as a small visual distinction.

Much easier to get individual colour distinction on these models, as they’re not covered in Red Carapace like the Berserkers, or “Toxic Green” skin as with the, er, Toxic ones, as I’m able to vary both the clothing and the skin on these. I used various Contrast Paints on them, thinning, mixing and varying them, even across the same model to create some (hopefully) disgusting discolouration – even if they’re not quite as disgusting as Poxwalkers. What say you, John?

I’ve thrown in this size comparison shot with a GW Ogre, showing that they’re decently tall models, especially when you compare the smaller bases with the GW model. That’s because I’m thinking they might count for Ann’s Miniatures of Magnitude Challenge being run over May & June. (Hurry! Last Days!)

Finally, here’s a group shot with the other completed modern Abominations. Not 100% sure on my next Zombicide step right now, I’ve got a ton of Fatties of all three types, but perhaps some of the more exotic Abominations from Black Plague and Green Horde would be more fun to paint, even if they’re not as common on the board as regular zombies, runners and fatties…