The penultimate post for this first squad of Iron Warrior-aligned Plague Marines. This time, I’m showcasing the plasma gunners. Their unique selling point is really the heat discolouration on their plasma guns. It’s an effect that I’ve been playing with lately, trying to teach myself to get to a point where it looks good. I think I’m at least partway there so far – the tricky part is the transition between the brown and the blue – the purple band. It seems a little harsh on the left hand figure still.

A little about these figures – both are from the same range as the previous pair – the 1995 run. The right-hand figure is a single piece casting, excepting the backpack. No comments about the sensibility or realism of a wooden casing on a weapon that fires superheated plasma, please. Because… containment field? Or perhaps – A Wizard did it! 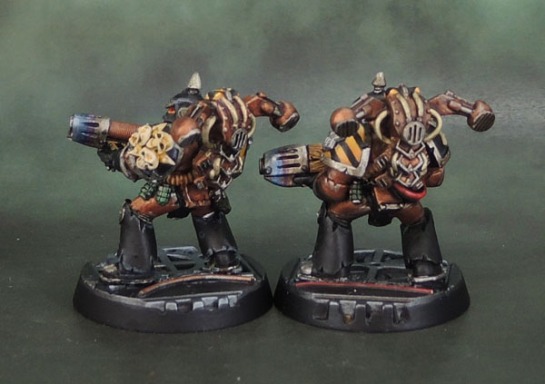 The figure on the left is a “regular” Plague Marine model from that line with a metal Nurgle shoulder pad of roughly the same vintage. In fact, it’s the same figure that once bore a bright, metallic-red flamer. Now, I’ve said before that I don’t like to change “finished” figures too much, but these guys were already getting a makeover with the new bases and the addition of Iron Warriors heraldry. Also (and rather importantly) Plague Marines can no longer take flamers. Sure, they get plague belchers in their stead, but they don’t look exactly like Imperial Flamers in my version of the 41st Millennium. So a second plasma gun for the squad, which obviously will have better synergy with the other plasma gun and the bolters. Plasma gun is a FW HH model (to keep it old-school) but cut down to fit properly. 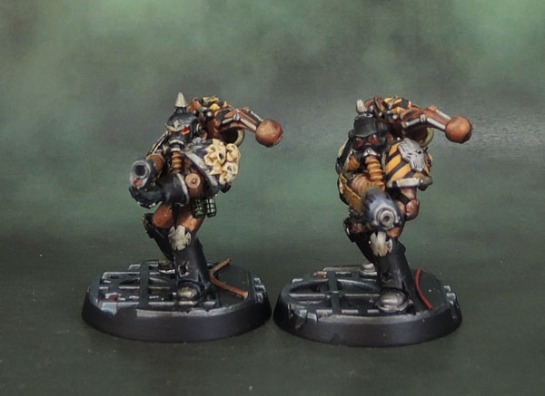 As with the previous two pair of Iron Warrior Plague Marines, the Iron Warrior icons came from Pop Goes the Monkey via Shapeways. I’ve ordered some more to ensure I have enough stockpiled for what may potentially come, and no, I get no kickbacks for mentioning them. I knew about 3d printed shoulder pads and weapons and stuff for Imperial Knights, but stick-on chapter icons that function like 3d transfers which can be added to any model – including my hoard of old metals? Yeah, I really like that concept.

One more post in this series to go because I really need to go sleep now and can’t write up any more text to go with the final photos for the squad. 😡