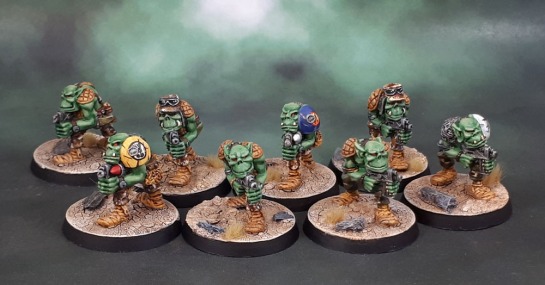 A few months ago – back at the end of May to be precise, Wudugast posted up some shots of his 40k Ork army for Army April, and ruminated about potentially completing another 25 boyz this year for a total of 100. Seeing this, I saw a chance to help motivate both him – and rather importantly – myself to get 25 Orks painted each and offered to do it as a mutual challenge. Since then, Wudugast has completed and shown another 10 Boyz, as well as a Mek and his Grot, while I on the other hand have completed ….nothing to date. So with Orktober being a thing, as well as regular old October pointing out how close the end of the year is, I found it time to remove my fist from my backside and get some Orks bloody well finished!

Luckily I had at least gotten some models started. 20 old-school, Rogue Trader Orks, to be precise. The ones I’ve got here are some trooper models from the very first Space Ork boxed set (and the second 40k box set ever) RTB02 Space Ork Raiders. I’m not sure if I have a full set of the boxed set due to the many repeated sculpts (13 troopers), though I do have all of the individual models. Being that I’m going old-school with these models, I thought a nods both to the original boxes and the Rogue Trader book was in order, as well as later narratives found in the various wars for Armageddon with some of the scavenged gear being worn. 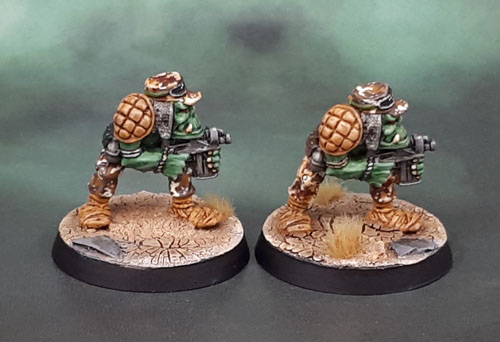 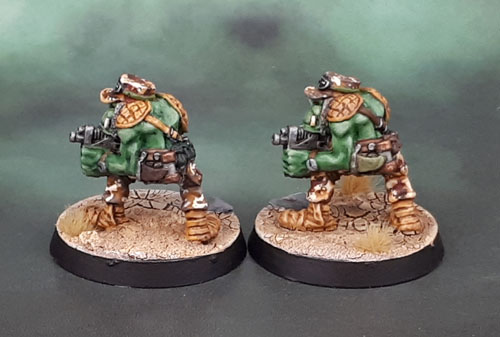 As with my other Orks, I’ve retained the variety of desert camo clothing being worn, in the pseudo-Blood Axe way I’m putting this force together. Mismatched camo, of couse, as it represents whatever they’ve managed to scavenge off the battlefields and trade from others. Most likely from enterprising Grots rather than directly from da humies.

These Orks were completed in three batches, and if I’d been posting regularly over the last couple of weeks, they’d have most likely have been in three seperate posts as I completed them. As it happens, they all fit into the one post perfectly, as they’re all models from the same boxed set. There are a few more on the way, but they sit still-unfinished on the paint desk as I type this shortly before posting this up, so they’ll likely be along in the next week – along with a few more that aren’t from the RTB02 box for variety. With these eight though, I’m at least started on my Ork Challenge Pledge. At almost the end of October. Only 17 more to go…